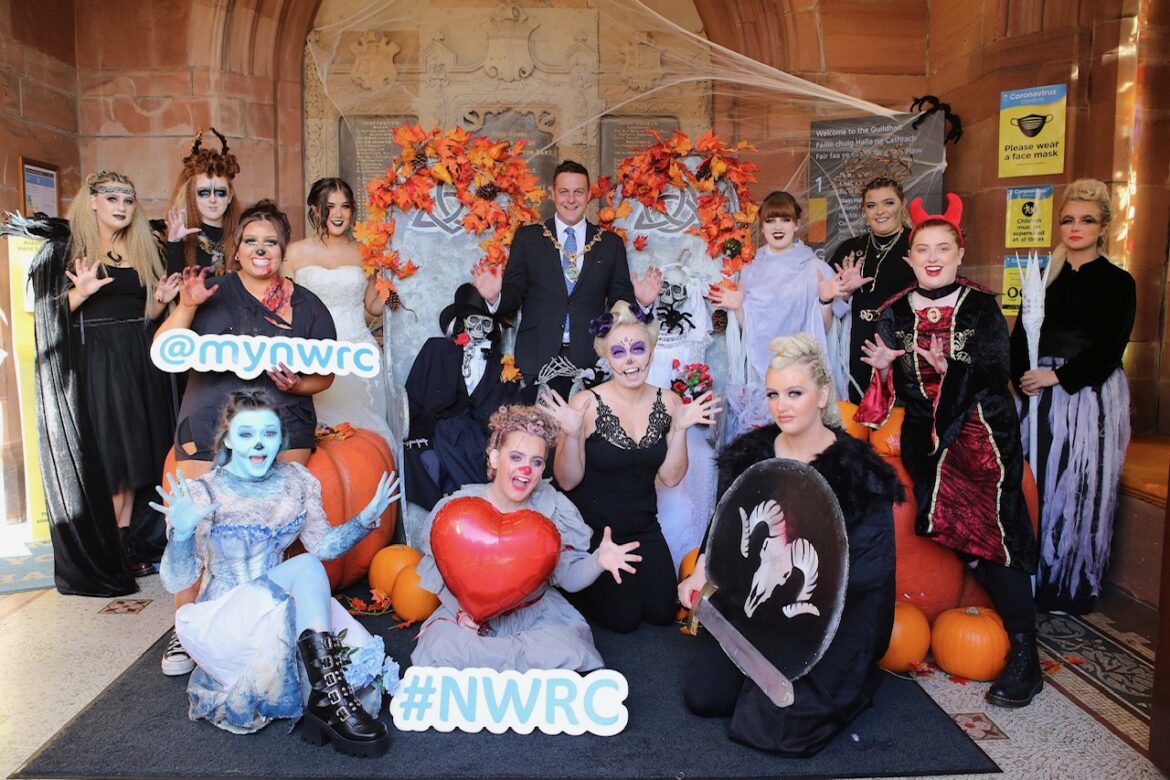 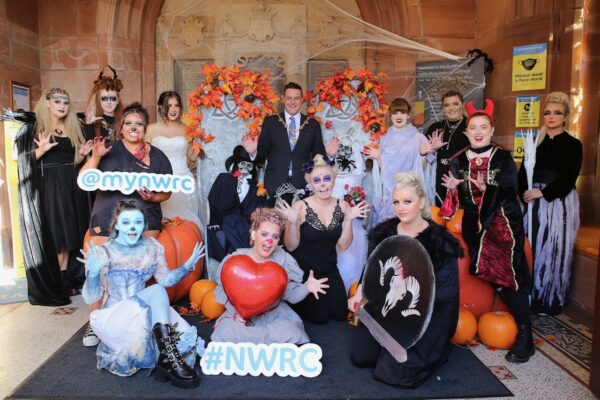 Halloween never fails to draw a crowd in Derry and this year the sense of anticipation is more palpable than ever with the return of on-street celebrations after many months of lockdown.

Preparations are well underway for a new look three-day festival, which takes place over an extended area taking in the Cityside, Waterside, Strabane and even spilling for the first time into Donegal. Huge numbers of visitors are expected to don their costumes and flock to the North West to help Awaken the Walled City once again.

One group who just can’t wait to play their part, are the students completing the NVQ Level 3 Diploma in Hairdressing at North West Regional College.

They have been channeling their inner Stephen King to come up with some absolutely chilling costume and hair creations, which will all contribute to their overall course mark this year.

The Diploma course comprises of practical training and assessments Coordinated by Elizabeth January and under the supervision of their lecturers who are industry professionals, and the colourful array of Halloween inspired concepts will now contribute to their practical digital portfolio.

The project is being organised in conjunction with Derry City and Strabane District Council as part of its wider Derry Halloween programme, aimed at engaging with partners across the community.

The students met with the Mayor of Derry and Strabane, Alderman Graham Warke, today at the Guildhall for a special photoshoot to show off their creative flair with a hair raising collection of designs, as Project Based Learning Co-Ordinator at the College, Annette Smith, explained.

“The students have had a fabulous time working on this project, which has really given them a platform to showcase their skills in the most inventive ways.

“We were delighted to work with Council on developing a project based learning event that combined the students’ practical learning with the theme of Halloween.

“They have sourced their own models and come up with a design concept that really captures the essence of the festival which is such an important event for the city.

“It’s really engaged the students and encouraged them to think outside the box when it comes to using their skills to achieve some more daring looks.”

Course Coordinator, Elizabeth January, said the initiative offered the chance to show off their practical skills.

“The project has offered a great opportunity post-lockdown to showcase the students’ skills and help them build a digital portfolio of evidence based work that displays the quality of their techniques to both the public and potential employers.

“It’s also been a great way to restore their confidence through styling and staging this event, and giving them a platform to really show off what they have learned.”

Mayor of Derry and Strabane, Alderman Graham Warke, said he had been impressed by the way the students had embraced the challenge.

“Who doesn’t love Halloween – the students today have really made the most of this opportunity to convey their own perceptions of our world famous celebrations, and reimagine the creepy characters they associate with Halloween.

“I’m so impressed by the standard of work today and the creative talents of our young up and coming hair and beauty professionals.

“I’m delighted that through its festival programme Council has been able to engage with a wide range of local partners including NWRC, to identify opportunities for learning and creative expression that are both fun and practical for our students.”

The project has provided the chance for the students to hone their practical skills in a more innovative context, as Saoirse McCloskey explains.

“This is my 5th year at NWRC and I’ve been involved in a few of the shows to date. I love having the opportunity to explore different themes and really test our skills and I’ve been influenced this time round by Sci-Fi and Action films.

“My cousin has been modelling for me and she’s familiar with this kind of work, so she’s really confident and easy to work with which makes a big difference.

“We’ve all been looking forward to seeing the end results of our designs coming together for the photoshoot this week – they might even inspire other people looking for Halloween ideas this year.”

Putting the final touches to her creation, student Elaine Gormley said she had been inspired by some of the traditional Celtic influences that feature strongly in this year’s programme. 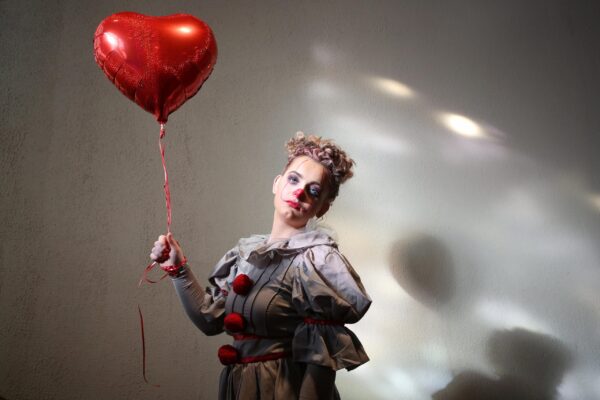 “This has been a fantastic challenge and I think everyone has enjoyed the opportunity to be part of the City’s Halloween celebrations.

“Particularly after the pandemic, which has had such an impact on local students and their mental health. It’s great to get back out there and get involved in practical projects.

“We’ve been working together to come up with design concepts in line with this year’s Halloween theme of Awakening the Walled City.

“I was very inspired by the Celtic theme, which comes through in lots of the programme characters including the Red Branch Knights, so I’ve created a Celtic Warrior.

“I think it’s a reflection of the traditional folklore that has shaped the celebration of Halloween through the centuries, and really captures the essence of Samhain.”

Deaglan Ferns took his inspiration from the movies, drawing on the unique characters created by Tim Burton.

“I love horror films, but I particularly enjoy the characters created by Tim Burton in his films, like the Nightmare Before Christmas and The Corpse Bride, which take a more light-hearted look at the traditional horror genre.

“I have a friend who already has blue hair so she was the perfect choice to model in keeping with the theme.

“It was so enjoyable coming up with the styling and also being able to work with a client again after Covid.

“As someone who loves Halloween – especially the Awakening the Walls and heading up the town – it was a great project to get involved in.”

Shauna Harkin also took some inspiration from the movies – but this time from the traditional horrors we love to view safely from behind a cushion.

“I decided to focus on the work of Stephen King, and the more classical spooky characters that we associate with horror,” she explains. 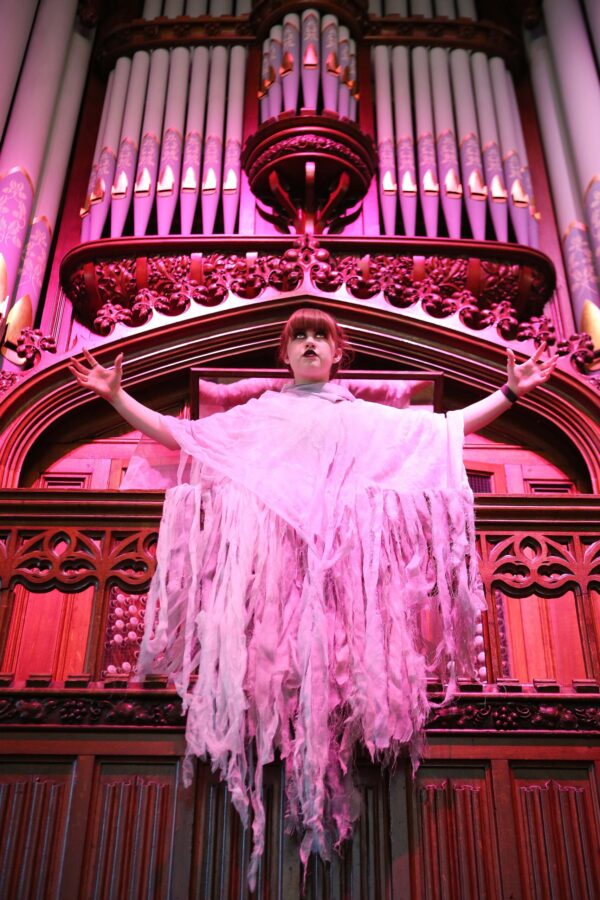 “I picked Pennywise the Clown as my character – but a female Pennywise.

“My sister kindly volunteered to model which made things easier and I’ve dyed her hair deep pink.

“We’ve had great fun coming up with the style and working together on the project, especially working to create such a spooky character.”

You can find out more about this year’s Derry Halloween programme at: derryhalloween.com