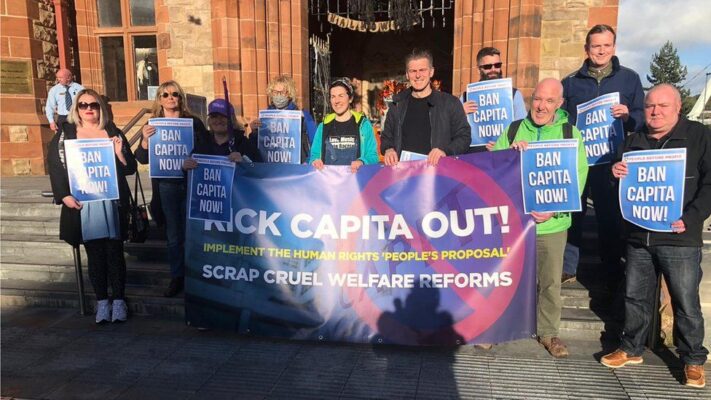 THE private company that assesses benefit claimants in the North of Ireland has apologised to Derry and Strabane councillors for any errors made by them in the past.

Officials from Capita and Department for Communities (DfC) were speaking at a special council meeting on Wednesday.

Brendan Flynn of Capita said: “There’s always a risk that we won’t get things 100% right all of the time.”

He told the meeting: “On the occasions where things do go wrong – we apologise – and we will continue to apologise and seek to put things right as soon as we become aware of any issue where we might have failed.

“We look to put in place safeguards, checks and balances and the continuous improvement processes to ensure those errors don’t happen again.”

Capita was hired in 2016 to carry out PIP assessments for the Department for Communities.

In June, a report from the Public Services Ombudsman Margaret Kelly found that too many people in Northern Ireland had claims for Personal Independence payment “unfairly rejected”.

Ms Kelly’s office carried out a 20-month investigation into complaints about the new system, which provides benefits to some of the most vulnerable in society.

In her report, Ms Kelly stated that “repeated opportunities were missed to make the right payment as early as possible in the process”.

It found that both the department and Capita often failed to seek and use further evidence, including that from medical professionals, in its assessments.

After the publication of the report, Capita said it would review its findings.

The DUP’s Maurice Devenny told the meeting that it seemed “assessors were the problem in the round”.

“What I am hearing from some applicants is that they had given information to the assessors but a lot of it didn’t appear [in their case] for some reason or another,” Mr Devenny said.

The SDLP’s Brian Tierney said Capita “are not user-friendly and said people are terrified whenever they get an appointment for either a telephone or face-to-face medical assessment”.

“Anyone who suffers from anxiety on a normal day would have their anxiety heightened massively going to these medical assessments – there has to be another way to do this,” said the forme SDLP Mayor of Derry and Strabane.

“Capita and the department have a massive job to do to turn their reputation around within communities,” Mr Tierney said.

Following the meeting, People Before Profit’s Shaun Harkin said the presentations from the DfC and Capita were “extremely disappointing”.

“They should have no role in ‘assessing’ whether or not people should be able to access any benefit.”