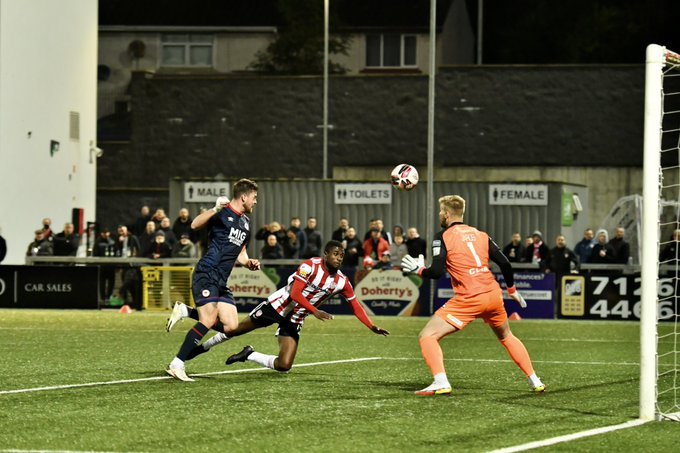 DERRY City increased their chances of securing European footbll next season with a deserved 1-0 win over St Pat’s Atheltic this evening (kick 7.45 pm).

And the wing puts the Candystripes right back in the mix of securing European football for next season.

Junior Ogedi-Uzokwe’s second half header was enough for the Candystripes to secure a massive three points, as they closed the gap on third placed Sligo Rovers to just a point.

The loss all but ended Stephen O’Donnell’s side’s chances of the title as they moved further behind champions Shamrock Rovers, but they will be wondering how they didn’t win the game.

The Saints went close to taking a sixth-minute lead but Matty Smith’s clever glancing header, which had Nathan Gartside beaten, came back off the post, before Cameron McJannet cleared the loose ball.

Minutes later Gartside was called into action, this time the Derry keeper did well to race off his line to deny Chris Forrester, after the midfielder had latched onto Sam Brone’s defence-splitting pass.

Soon after, a clever flick by Junior released Evan McLaughlin down the right side of the Saints’ penalty box, but his side-footed effort from a tight angle was saved by Jaros.

A fantastic flowing move on 39 minutes by St Pat’s ended with Forrester’s sublime pass releasing Smith, but with only Gartside to beat, the striker’s powerful close-range strike was saved by the keeper.

Right on the stroke of half-time the woodwork came to Derry’s rescue for a second time as Forrester’s superb left footed 20-yard drive, which had Gartside beaten, rattled the crossbar.

Gartside was called into action early in the second half when he did well to push away Darragh Burns’ long-range strike.

The home side broke the deadlock on 63 minutes in superb fashion as substitute Jack Malone released McGonigle down the right and his teasing cross into the six-yard box found his striking partner Junior, who bravely headed home from close range.

On 78 minutes a neat piece by Saints substitute Jason McClelland ended with his drive well held by a diving Gartside.

Both sides had a man dismissed on 85 minutes as Saints substitute Ronan Coughlan was red carded after tussling with Ciaran Coll, during the aftermath of the brawl, referee Rob Harvey then showed yellow cards to Forrester and Derry pair Danny Lafferty and Cameron McJannet and having received a caution minutes earlier Lafferty was also sent-off.

Gartside had to make two top-draw saves in quick succession in the closing stages, firstly diving to keep out Bone’s curling effort, before somehow denying Smith with the close-range follow-up effort.