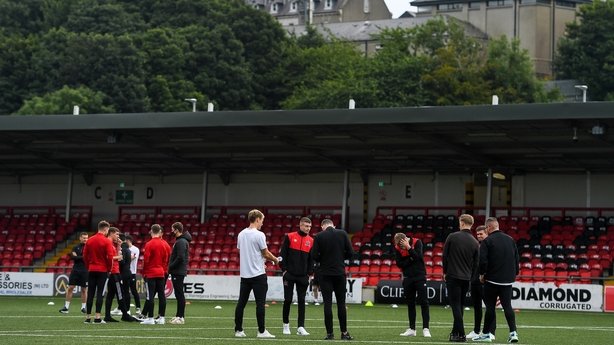 City v St Pat’s: It will be another close game, Higgins

DERRY City are back in action this evening, Friday, October 15, with a home league match against second-placed St Pat’s Athletic (kick off 7.45 pm).

The Candystripes put up a good showing against Shamrock Rovers in their last game and were boosted by Sligo not making any real ground on them in the table.

With Sligo having that fixture tonight, they will see this as an opportunity to move close and try to grab that European place late on as the season draws to a close.

The FAI Cup will have a say on whether the top four will mean Europe.

For St Pat’s they know a big day is on the horizon with a semi-final against Dundalk next week, and Alfie Lewis’ injury-time winner in Drogheda was vital for maintaining second place and not getting sucked back into a race for the top four.

In theory the Saints could still be in a title race if the Dublin Rovers drop points tonight and on Monday against rival Bohemians, but in truth their season is all about consolidating the real progress made so far and reaching the Aviva Stadium in mid-November.

This will be a test against the improving and buoyant Candystripes who are now fourth in the league and still in which a chance of bagging a European place next season.

City manager Ruaidhri Higgins said: “It’s such a competitive league at the best of times and especially at this stage, every team has something to play for.

“St Pat’s have had a fantastic season and are very strong as you can see from their league position.

“We’ve had a few really close games with them already this year and we certainly don’t expect anything different.”

With no match last weekend due to International committments, and the cup semi-finals scheduled for next weekend, it hasn’t all been plain sailing in terms of preparation.

Higgins, however, was happy to take a ‘behind closed doors’ friendly to keep his side ticking over.

“It’s a bit stop-start at the minute but we got a really good workout last Thursday and the boys have trained really well all week.

“We’re looking forward to the game and while we know how good a side they are, we also know if we’re right at it we will give ourselves every chance of picking up three points.”

St Pat’s manager Stephen O’Donnell (St Patrick’s Athletic manager): “Going up to Derry is a really tough place to go, they are going really well since Ruaidhri (Higgins) has come in so we are under no illusions. It’s going to be a very difficult game, but a game we are looking forward to.

“If we play to our potential, we are tough opposition for anyone but also if we know we don’t apply ourselves in the right way, any team can turn us over.”

Derry City: James Akintunde is suspended while Joe Thompson is back in the squad.