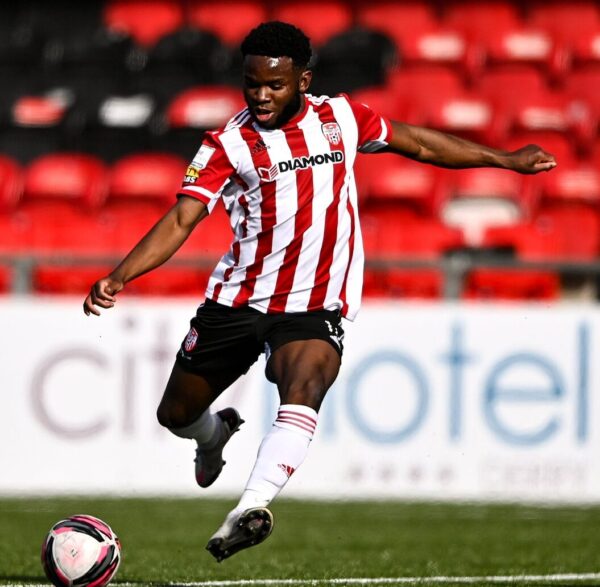 Frontmen Jamie McGonigle, James Akintunde and Junior Ogedi-Uzokwe were all on the score-sheet for the second game in a row, as the Candystripes moved to just three points behind third-placed Sligo Rovers.

Ruaidhri Higgins’ side could have won by a bigger margin, although Longford did have some good passages of play during the 90 minutes, but never really threatened CIty keeper Nathan Gartside.

City had a half chance on two minutes as Will Fitzgerald’s left wing corner found Cameron McJannet, but the centre-back’s header flashed over the bar.

The home side took the lead on 16 minutes after a neat finish by McGonigle.

The front man latched onto Ogedi-Uzokwe’s flick-on, before racing away from Joseph Manley and firing past Lee Steacy.

Despite being well in the game, the visitors fell further behind on 29 minutes as Fitzgerald’s lay-off found Akintude and the striker’s side footed effort from the edge of the box, took a massive deflection on it’s way past Steacy.

Moments later a 35 yard free-kick from Junior took an awkward bounce, which Steacy could only parry away straight into McGonigle’s path, but the ex-Crusaders front-man was unable to turn home the rebound.

Just before the break McGonigle went close to scoring his second of the night, when on the counter attack, his curling effort whistled just past Steacy’s left hand post.

Derry missed a golden chance to score a third goal on 48 minutes as Fitzgerald’s teasing right wing free-kick curled into the back post found Junior, but his close range header was kept out by Steacy.

Town should have pulled a goal back minutes later as Darragh Nugent got in behind the City defence to latch onto Dylan Grimes’ pass, but after rounding Gartside, the big midfielder fired over.

The home side wrapped the points up on 82 minutes as Junior netted Derry’s third goal when he turned the ball home, after Steacy had done well to keep out Danny Lafferty’s initial wonder strike.