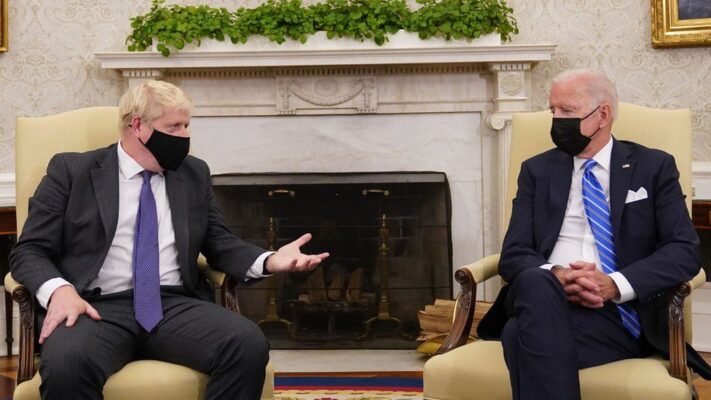 Brexit: Biden in new warning to UK over North

Boris Johnson and Joe Biden met in the Oval Office

US President Joe Biden has again warned that peace in the North of Ireland must not be jeopardised as a result of complications caused by Brexit.

Mr Biden was speaking at the start of talks in Washington with British Prime Minister Boris Johnson.

The peace process came about through the hard work of the then SDLP Foyle MP, the late John Hume

He said he had concerns about the Irish border, amid continuing issues with the NI Protocol.

Mr Johnson said they were at one on the issue and that nobody wanted to see anything that would interrupt or imbalance the Good Friday Agreement.

The protocol keeps the North aligned with the EU’s single market for goods to ensure free trade across the Irish border.

However, it has led to additional checks on goods being traded across the Irish Sea between Great Britain and the North of Ireland.

This has drawn criticism and protests from unionist politicians in the North who have called for it to be scrapped.

The UK wants a fundamental renegotiation of the protocol but the EU has said that is not possible, although it is prepared to consider additional flexibilities.

Mr Biden told the media at the White House that he felt “very strongly” about the protocol.

“We spent an enormous amount of time and effort, the United States, it was a major bipartisan effort made.

“And I would not at all like to see, nor I might add would many of my Republican colleagues like to see, a change in the Irish accords, the end result having a closed border in Ireland.”

Earlier this year, the president warned that the UK-EU dispute over border controls should not risk the peace process in the North.

Mr Biden also played down the chances of brokering a post-Brexit free trade deal with the UK.

A UK government spokesperson said its priority was still getting a deal with the US alone.