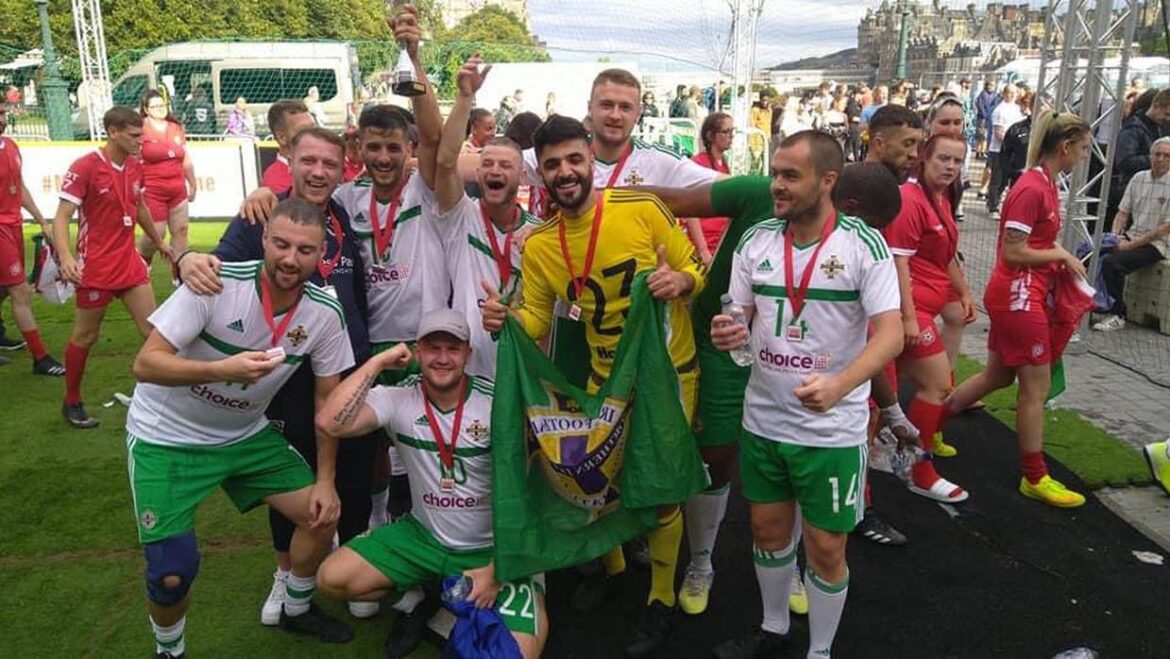 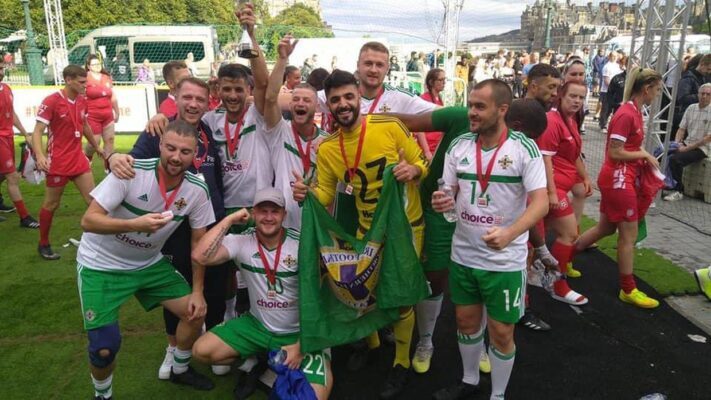 A STREET soccer team are returning to the North of Ireland with a trophy after winning the inaugural Four Nations Challenge Cup at the weekend.

The team, made up of eight men from homeless and disadvantaged backgrounds, beat England 7-3 to win the UK-wide event.

The two-day Edinburgh tournament and took the form of four-a-side matches, with each game lasting 14 minutes.

Derry man Ryan Sharkey (28) captained the men’s side and was also their top scorer.

He has been involved with the Street Soccer NI charity for more than eight years and previously told how it had helped him battle his addiction with alcohol and drugs.

“I am two and a half months sober and getting support from a charity called Heal the Hurt,” he said.

“I’ve had enough. I need to change. I need to be there for my son. Going to Street Soccer NI really helps as it gives me something to do each day.

“It was the best weekend with the best group of people.”

Street Soccer NI took 16 people to Scotland for the tournament, with the women’s team losing out to England in their final, despite defeating them in a previous round.

The charity posted a tweet on Monday, writing: “So many heartbreaks over the years in competitions.

“We finally win a men’s tournament and bring a trophy home.

“Now we get ready for the Homeless World Cup next year where we take on 48 other countries.

Street Soccer NI’s co-founder, Justin McMinn said that they don’t yet know the location of the 2022 Homeless World Cup, but are excited to attend as it was cancelled last year due to the Covid-19 pandemic.

“England actually beat us in the group so they were a tough team, and then we just raised our game and hammered them in the final. We’ve only brought the one trophy home but both teams did great,” he said.

Louise (40) who has been homeless for more than three years and lives in a west Belfast hostel with her three youngest children, said the best thing about the weekend was the camaraderie between the teams.

She said: “Every single one of us got on so well and when the boys won we were allowed to come onto the pitch and join them. It was surreal, amazing. We’re just one big team.”

Portuguese man Bruno (31) moved to Derry city in 2017, following a spell of deep depression. Having been with Street Soccer NI for three years now, his highlight of the weekend, along with winning, was bonding with people from all over the UK.

“One of the fellas in the Wales team threw up in the very first game,” he said.

“Their second game was against us and I went over to him and gave him some breathing and meditation techniques to try and calm down his anxiety. He was over the moon and ever since then it created a big bond between us and Wales.

“Breaking the ice with everyone was a really good experience. While you’re on the pitch, the competition is high, but off the pitch everyone was chatting and sharing mutual experiences, talking about their backgrounds.”

After players engage, they are offered help with housing, employment, education, addiction and more.

The charity holds weekly sessions in Belfast, Derry and Coleraine, and plans to branch out to Strabane and Downpatrick.

Choice Housing and the NI Executive were the team’s main sponsors.