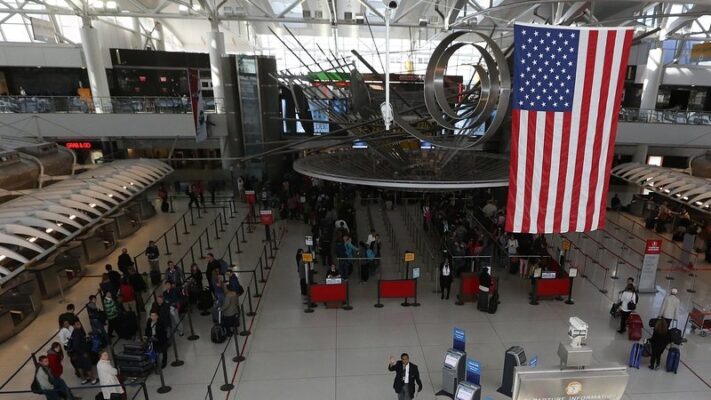 US ends ban on fully vaccinated passengers from November

THE United States has announced that it will lift Covid travel bans on air passengers in November if they are fully vaccinated and undergo testing and contact tracing.

The easing of travel restrictions, imposed 18 months ago by Donald Trump as the Covid-19 pandemic first erupted, marks a significant shift by Mr Biden and answers a major demand from European allies at a time of strained diplomatic relations.

The US restrictions were first imposed on travellers from China in January 2020 by Mr Trump and then extended to other countries in the following months, without any clear metrics for how and when to lift them.

The United States currently bars most non-US citizens who within the last 14 days have been in Ireland, Britain, the 26 Schengen countries in Europe without border controls, China, India, South Africa, Iran and Brazil.

There will be some exceptions to the vaccine policy, officials said, including for children not yet eligible to be vaccinated.

The new rules do not yet apply to travellers crossing land borders with Mexico and Canada.

Airlines have heavily lobbied the White House for months to lift the restrictions, but were unsuccessful at having them lifted in time for the summer travel season.

The White House said in July it had concerns about the highly infectious Delta variant and a rising number of US Covid-19 cases.

The seven-day average of reported US cases has more than doubled since then.

Currently only US citizens, residents and foreigners with special visas are allowed to enter the United States from most European countries.

The travel restrictions had deeply irked EU and British authorities.

The European Union had recommended that member states reimpose restrictions on American travellers who had earlier been free to enter if vaccinated. US travellers have been allowed to visit Europe during the summer season.

Mr Biden’s move comes on the eve of the UN General Assembly in New York, where the pandemic is due to be the headline issue.