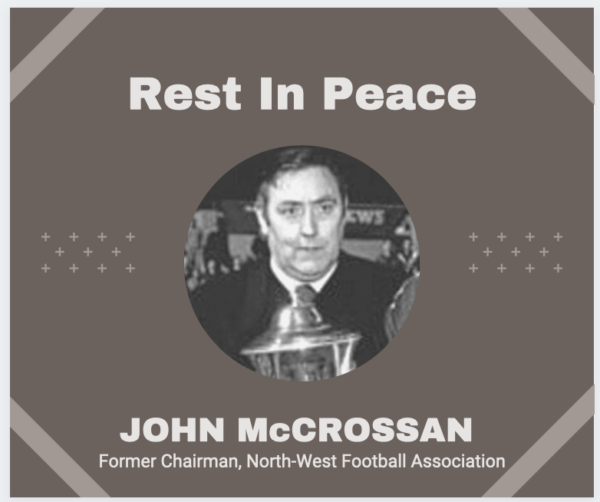 FOOTBALL in the North West is mourning the passing football of stalwart John McCrossan.

Mr McCrossan passed away in Altnagelvin Hospital on Thursday morning.

His the former chairman of the North West Football Association.

In a Facebook posting, NWFA assistant secretary Andrew Millar said: “It is my sad duty to inform member clubs of the North-West Football Association of the passing of a much-respected stalwart of football.

“There will be a funeral mass in Strabane at 10am on Saturday, September 18.

“May I offer my condolences to Johns’s immediate family, and extended family on behalf of the NWIFA.

“Beloved son of the late Philip and Cissie, much loved brother of Betty, Cissie, Michael, Pat, Detta and the late Felix, Joe and Philip.

“Funeral leaving Quigley’s Funeral Home, Strabane, on Saturday (September 18th) at 9.30a.m. for Requiem Mass in the
Church of the Immaculate Conception, Strabane at 10am.

“Deeply regretted by his sorrowing brother, sisters, nephews, nieces and family circle. Sacred Heart of Jesus have mercy on his soul.

“In accordance with current restrictions (re: Coronavirus) the house and funeral will be private to family only please.”

In a statement, it said: It was with sadness that the Irish Football Association learned of the passing of John McCrossan.

“John, who hailed from Strabane, was a stalwart of intermediate football in Northern Ireland and of football in the North-West.

“He was secretary of the Northern Ireland Intermediate Football League for many years and both secretary and chairman of the North-West FA.

“John was a member of the Irish Football Association’s Council from 1994 to 2014 and an IFA Life member following that.

“He was also the recipient of a prestigious Torch Trophy, recognising his achievements in the promotion and development of amateur football in Northern Ireland, in 2006.”

“He was incredibly knowledgeable in football terms and I learned so much from him in that time.

“He was a gentleman blessed with a gentle nature but could also be ferocious in his defence of what he thought to be the right thing to do.

“There was no better person to blend those great qualities together. He is a sad loss to football.”

The IFA added: “We would wish to send its sincere condolences to John’s family at this sad time.”