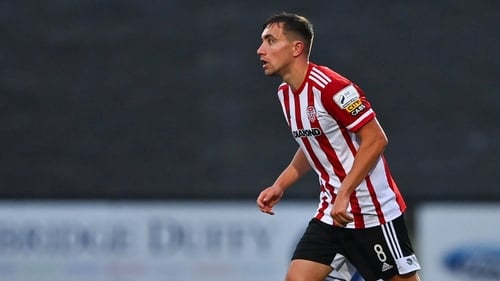 DERRY City left it late to earn a point against North West rivals Finn Harps in an action packed 2-2 draw at the Ryan McBride Brandywell Stadium (kick off 7.45 pm).

Derry took the lead thanks to Junior Ogedi-Uzokwe’s header, before goals from Jordan Mustoe and Ryan Rainey gave the Donegal men the lead, but Joe Thomson’s 89th minute equaliser settled things on the pitch.

However both teams were reduced to 10 men in the aftermath of Thomson’s late strike, when Harps goalkeeper Mark-Anthony McGinley and City’s goalscorer Thomson were dismissed by referee Neil Doyle, as both sets of players were involved in a row.

City went close to breaking the deadlock on 11 minutes as James Akintunde’s clever pass found Daniel Lafferty, but after getting in behind the Harps defence, his left footed effort was kept out by McGinley.

McGinley was called into action just after the half-hour mark as he dived low to keep out Evan McLaughlin’s snapshot, as the midfielder impressed in the opening half-hour.

Harps equalised on 39 minutes as Mustoe’s outstanding left-footed dipping long-range strike, sailed over Nathan Gartside and clipped the inside of the post on its way into the net.

Just before the break Derry went close to going back in front as Ronan Boyce’s looping header, which had McGinley beaten, was headed off the line by midfielder Will Seymor

Moments later Derry were denied twice in quick succession as firstly substitute Jamie McGonigle’s well hit drive was tipped around the post by McGinley and the Harps keeper had to keep out Thomson’s shot, after Derry’s resulting corner routine had created the chance.

Derry had a golden chance to level things on 77 minutes as substitute Will Fitzgerald released McGonigle, but the ex-Crusaders striker was denied by McGinley, as his tame side-footed strike was straight at the Harps keeper.

McGonigle had another super opportunity moments later this time as Junior’s knock down found the front man inside the penalty box, but his close range shot was saved by McGinley. 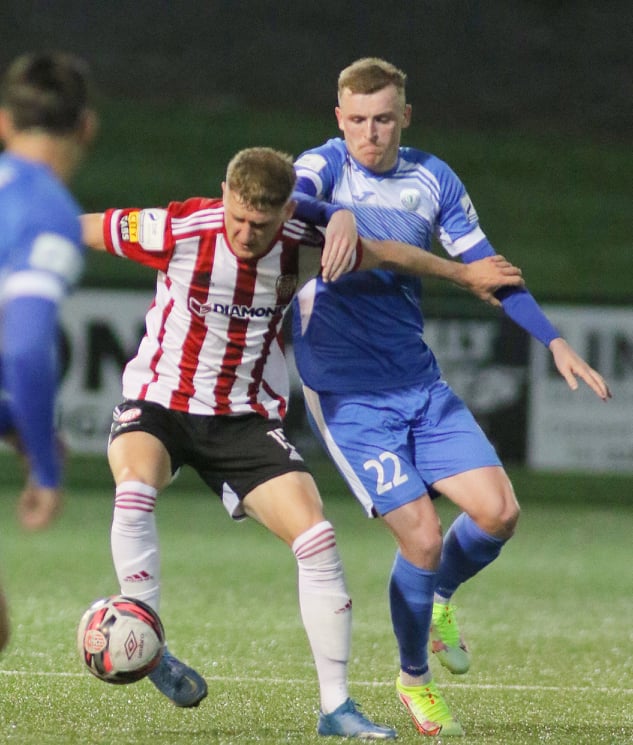 The home side levelled things on 89 minutes as Thomson’s powerful close range effort flew past McGinley and as Derry attempted to get the ball back, a row erupted and resulted in both Harps goalkeeper McGinley and City’s goalscorer Thomson receiving straight red cards from referee Neil Doyle.

As Harps had made all their changes, defender Johnny Dunleavy had to go into goals for the closing stages, but Derry were unable to test him.