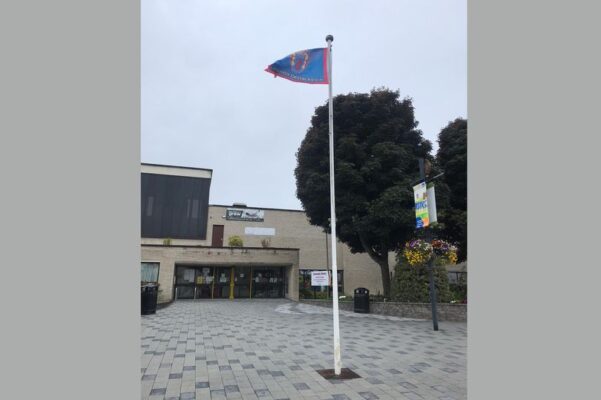 A CO Derry council spent £800 removing a UDA flag erected outside its offices.

Staff faced “intimidation” over attempts to take down the loyalist paramilitary flag in early July when it was erected on a flagpole in Limavady.

An outside contractor was subsequently employed by the council to remove the flag and flagpole, a councillor said.

The cost of removing the flag was £800, Causeway Coast and Glens Borough Council (CCGBC) said in a Freedom of Information response.

Deputy Mayor Ashleen Schenning expressed disappointment that ratepayers’ money had to be spent dealing with the incident.

The SDLP councillor for Limavady said she received more than 60 complaints about the flag and worked with council officials to arrange its removal.

She said council staff tried to remove it in the early hours of July 8 but “it appeared the flagpole was being watched or guarded”.

“The staff felt intimidated and unsafe,” she added.

“The next day estate services engaged an outside contractor and with the support of the police the flagpole was removed at 4pm without incident.

“Although the cost to council may have been £800 I am sure the in-kind costs of council staff and the PSNI well exceeded this figure.

“These are unnecessary costs to the ratepayers in CCGBC. Money that could be better spent in our communities ensuring our young people do not get caught up in this type of behaviour.”

There was also criticism in July of a bonfire on Limavady’s Greystone Road that had been painted green, white and orange.

Local politicians branded the bonfire structure as “expression of hate”.