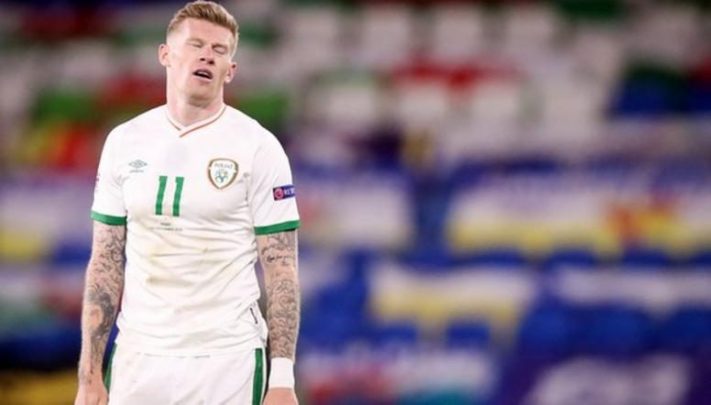 Wigan warn League One clubs if James McClean is abused

WIGAN Athletic have written to their League One rivals to warn clubs that the Football Association will charge them if the Republic of Ireland international James McClean is subjected to sectarian abuse in their stadium.

Wigan, whom McClean rejoined last week, sent a letter to clubs on Monday advising them to “consider putting plans in place to respond to any inappropriate or unlawful chanting”.

It is a proactive move by Wigan, for whom the Derry-born winger played previously between 2013 and 2015.

“I am raising these matters with you to ensure you are fully sighted on the circumstances and to avoid your club being charged with contravening rule E20 by the FA,” reads the letter from Wigan’s stadium safety officer and head of football administration, which goes on to thank clubs for their support.

“If there were any issues during the game, it would also be helpful if you spoke to James to advise him of the action taken.”

Last year Barnsley were fined £20,000 after some of their supporters directed sectarian abuse at McClean and the FA criticised the Championship club for not doing anything to “prevent or deter such behaviour”.

Huddersfield fans were warned last year over the public address system about their “offensive behaviour” after their game against Stoke was stopped in the second half, after McClean reported abuse to the referee.

McClean has said he has received “more abuse than any other player” during his 10-year spell in England.

He has been singled out for sectarian abuse after opting against wearing a poppy on his matchday shirt in recent years in respect of those who died in Derry on Bloody Sunday in 1972, a matter on which he has been vocal.

Of his decision in 2014, he said: “I am very proud of where I come from and I just cannot do something that I believe is wrong.”

This year the Football Association of Ireland offered its support to the winger after he suffered online abuse. McClean revealed he had been sent death threats via messages on Instagram and called for sectarian abuse to be taken seriously.

“Is being abused for being Irish and anti-Irish abuse acceptable?” he said.

The Professional Game Match Officials will be asked to report any instances of abuse of which it becomes aware.

Against Barnsley in November 2019, McClean reported he had been “racially abused” to the referee, who advised the fourth official, who informed both clubs and stewards.

Wigan have discussed the reporting procedure with McClean, the FA, the PFA, Kick It Out, the English Football League and Greater Manchester police.