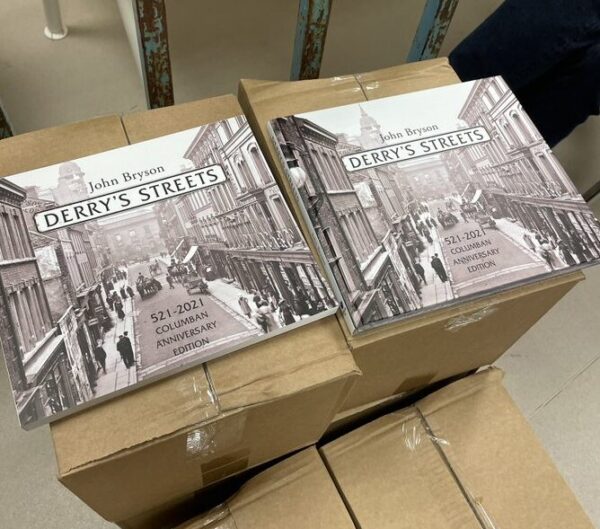 A NEW edition of the book Derry’s Streets, published to mark the 1,500th anniversary of the city’s founder Colmcille, has proven popular since hitting the shops.

The book, which documents the history of Derry through its streets, is selling out fast in its new Columban Anniversary Edition.

The release of this new edition of Derry’s Streets comes after the death of the author, John Bryson.

Garbhán Downey, of Guildhall Press, wrote in the updated introduction for the book of John’s importance to the city.

He said: “There are few people who cherished Derry more than John Bryson – or who knew its every corner so well.

“This book is the legacy of a life of profound study, which saw John Bryson spend months and years sifting through ancient archives in London, Dublin and Belfast. It is a lyrical monument, which could only have been created by a writer who loved his subject.

“It is the work of a man who set himself a mission to unearth Derry’s story from the mists of the past to preserve it for generations stretching forward into the mists of time.”

Author John Bryson had begun work on this Derry’s Streets Columban Anniversary Edition, setting the 1500th anniversary of the birth of Colmcille, 2020-2021, as his target date.

The introduction reads: “His focus was showing how Derry had operated and developed as a successful Irish city for more than 1000 years before Plantation.”

Richard Doherty paid tribute to the author in the 2021 foreword.

He said: “Who else could point to individual stones in the city’s walls and explain their origin? Or that a feature on those walls marked an entrance/exit for a theatre and the city’s first cinema?

“Where was No. 1 Derry? John would have taken you to the corner of Society Street and Bishop Street, the site of the first building in the new city.”

The 2021 edition of Derry’s Streets looks at the Lands of the post-Columban Monastery, and of the Later Cathedral, Cistercian Convent and Dominican Priory.

It also delves into Derry’s history as the Plantation Town of 1613-16.

The book is full of photographs and artists depictions of the streets of Derry, allowing those who read it to be immersed in their city’s history by seeing the changes in the streets that surround them.