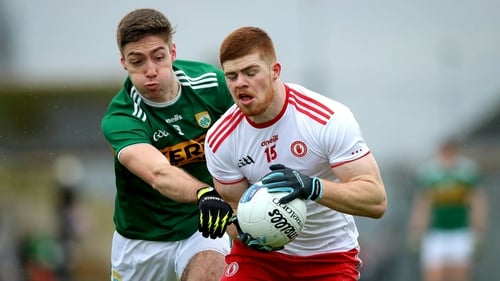 Tyrone’s All-Ireland SFC semi-final against Kerry has been pushed back a week to Saturday, August 21 because of Covid-19 cases in the Ulster champions’ camp.

The match was scheduled to be held this Sunday, a day after the first semi-final between Dublin and Mayo.

Tyrone’s panel was hit by Covid in the build-up to the Ulster Championship final, and the entire squad and management were tested on Saturday.

The rescheduling of the game means the final will take place on 4 September.

Red Hands joint-manager Feargal Logan was among those to miss the provincial decider against Monaghan due to a Covid issue, with players Frank Burns and Tiernan McCann also unavailable. A number of players are understood to be self-isolating following the outbreak.

A crowd of 24,000 is scheduled to attend the Kerry v Tyrone semi-final but a GAA statement said it would hold discussions with the Irish Government to see whether such attendance figures can remain in place for the revised fixtures.

The throw-in time for the 21 August contest is yet to be confirmed by the GAA.

The GAA said the decision had been taken “following a status report received by the GAA relating to positive Covid cases in the Tyrone panel”.

“This change will necessitate the GAA Football All-Ireland final being re-arranged to take place on Saturday September 4,” added the GAA statement.

“The GAA Football U20 final meeting of Offaly and Roscommon will proceed as planned at Croke Park at 1.30pm on Sunday with the same permitted attendance.

“The GAA will continue to liaise with the appropriate government departments and officials to discuss the practicalities of having these revised fixtures included under the statutory instrument that has facilitated the increased attendances of recent weeks.”

The All-Ireland Ladies Junior Football Final is scheduled for 4 September at Croke Park and the GAA said it would “also be working with the LGFA [Ladies Gaelic Football Association]” on this issue.

Tyrone GAA “welcomed” the decision to postpone the semi-final.

“We will continue to comply with all guidelines from the PHA [Public Health Agency] and Croke Park, keeping the health of the players and management as our primary concern,” said a Tyrone statement.

Kerry GAA described Monday’s announcement as “a disappointment to us all” but added that “we acknowledge we are all living in very challenging times and Covid continues to circulate in our communities necessitating the decision”.