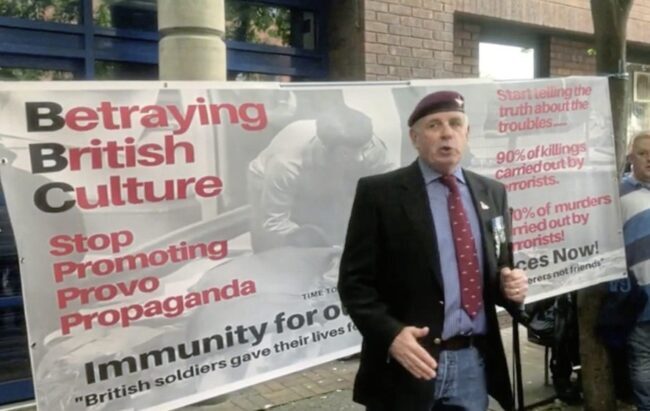 THE TUV last night defended a former British paratrooper who plans to run as a party election candidate after the Bloody Sunday Trust accused him of making “outrageous and inflammatory” remarks about the 1972 massacre of unarmed civil rights marchers.

The Derry-based trust challenged TUV leader Jim Allister to state whether he believed John Ross is “fit to be a candidate” in the Stormont election.

Mr Ross, a former platoon sergeant in the Parachute Regiment, will stand as the TUV’s candidate in East Belfast at the next Assembly election which are expected to be held no later that May 5, 2022.

But the Bloody Sunday Trust has taken issue with remarks the former soldier made at a protest outside the BBC’s Blackstaff studios in 2019.

In a YouTube video of the demonstration posted by former TUV councillor Jolene Bunting, he describes Bloody Sunday as a “successful operation”.

He goes on to attack Ulster Unionist leader Doug Beattie who criticised a television interview given by another paratrooper, in which the soldier described Bloody Sunday as “a good operation, a job well done. They all came out alive.”

Mr Ross also questions whether those shot dead in Ballymurphy in 1971 were innocent.

Bloody Sunday Trust chair Tony Doherty, whose father was shot dead along with 12 others on January 30 1972, said Mr Ross’s comments were “highly insensitive and blatantly untrue”.

“Bloody Sunday has been the subject of a meticulous public inquiry which found that all those killed and wounded were innocent and that they were all shot – by Paras – who were acting without fear or panic,” he told The Irish News today.

“In short, they were murdered in cold blood.”

Mr Doherty said no election candidate should be “allowed to present distorted claims about victims of violence”.

“I would like to ask Mr Ross and Mr Allister which part of the military operation on Bloody Sunday was successful and what was good about it?” he said.

“In what ways was it well done? Is it simply the fact that they, the Paras, all came out alive that makes it a success, despite what they did?”

He challenged Mr Allister to say whether the remarks were “a vocal ex-Para ranting about Bloody Sunday” or a “great vote-catcher”.

But the TUV last night appeared unapologetic, saying “it is not for the Bloody Sunday Trust to decide who the TUV candidate is”.

“They will neither choose TUV candidates nor proscribe what they can and cannot say,” a spokesperson said.

“Mr Ross is an excellent candidate who has served his country with distinction and who has been deeply involved in the campaign for justice for those who served in Operation Banner.”

“One point which is not in dispute is that soldiers on the day came under fire,” the spokesperson said.

“Indeed, Lord Saville found that Martin McGuinness was probably armed with a machine gun on the day.”