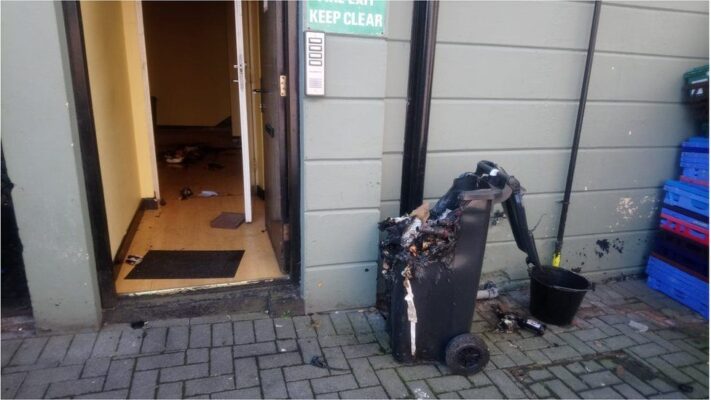 Bins set on fire at flats on Derry’s Strand Road

A 27-year-old man faced a court in Derry accused of kidnapping and robbing a man at knifepoint in the city centre.

Neil Henry, of Aberfoyle Terrace, was accused of a number of charges in connection with alleged incidents in the early hours of Tuesday, August 3.

They include arson at flats in the Strand Road, robbery, wounding with intent to cause grievous bodily harm, and kidnapping.

He is further charged with making threats to kill police officers, possessing a knife and possessing a class A drug.

Derry Magistrates’ Court heard allegations that police received a report of a fire which had been started in bins in the Strand Road area.

The fire was set at the only entrance and exit to a property which contained four flats, all of which were occupied at the time.

The court heard allegations that CCTV was checked and a witness named Henry as one of two men who had entered the property.

It is alleged that around 4:45am, less than an hour after the fire was reported, Henry followed a man to the Diamond after they exchanged words.

Henry allegedly took out a knife, pushed the man against a wall and demanded all the items out of his pockets.

The court heard Henry then took him to a bank in the Diamond area and demanded £50, which the complainant refused to give him.

It is claimed Henry put the knife to the man’s cheek when he refused to tell him where he lived which allegedly caused a small cut.

The 27-year-old allegedly dropped the knife and returned some of the items taken from the complainant after the man put his hands on Henry’s neck.

The incident was reported to police and the defendant was arrested a short time later.

During a search a blue tablet was allegedly found.

The court heard allegations that as he was being taken to the police station, the defendant threatened to burn two police officers and their families.

He also allegedly made a statement to police that the man was “lucky I didn’t slice his throat”.

The court also heard allegations that Henry claimed that when he was released from custody he would go after the complainant and his family.

It is further alleged Henry said the man was ”lucky he didn’t get a cut down” and “yes I took a c*** hostage’.

The officer told the court that these were ‘violent reckless offences’ and Henry has 125 previous convictions, with over 60 of them relevant.

She said that some of the witnesses are known to the defendant and there are concerns about the safety of police and members of the public if he is granted bail.

Accepting that the charges Henry faced were “very serious allegations”, defence barrister Sean Doherty said his client was denying the charges and asked him to be committed to bail.

But District Judge Barney McElholm refused bail, stating that no address in the city would be suitable and he could not conceive of any conditions that could prevent further offending.

“This was an appalling catalogue of offending over a short period of time. Then to top it all off he threatens two police officers, to burn them and their families,” the judge said.

He added that Henry “appears, at the moment, to be a danger to the public”.

Henry was remanded in custody to Maghaberry prison.

He is due to appear in court again via videolink on Thursday, August 26.