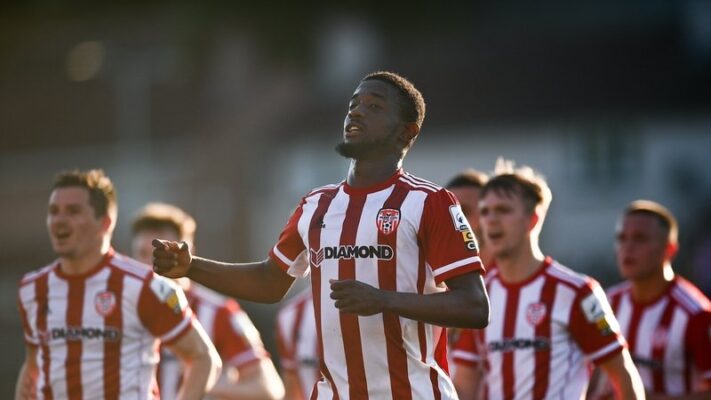 GOALS either half from Daniel Lafferty and Junior Ogedi-Uzokwe gave Derry City a 2-0 win over bottom club Longford Town at Bishopsgate.

Lafferty rifled the ball into the corner with a sweetly-struck left-foot shot on 31 minutes for the opener.

Junior rolled the ball into the net after 82 as the Candystripes moved above Dundalk into sixth in the table.

Derry could have scored more but Evan McLaughlin fired wide and James Akintunde had a shot blocked.

Aaron Robinson made the decisive intervention to deny Akintunde, who provided the assists for both of his side’s goals.

Akintunde laid the ball off for Lafferty to strike home and then rolled the ball into the path of Junior for Derry’s second.

Loan signing Bastien Hery made his debut as a second-half substitute for the visitors while Jamie McGonigle was also introduced from the bench by manager Ruaidhri Higgins.

The win avenges Derry’s defeat by Longford at the same venue in the opening game of the season, their opponents having now failed to secure three points in any of their subsequent 21 outings.

Higgins’ charges have now secured six wins on the road and will be at home to Drogheda in their next league match on Friday night, August 6.

The Brandywell club had lost their previous two league encounters – 4-2 against Shamrock Rovers and 1-0 to St Patrick’s Athletic.