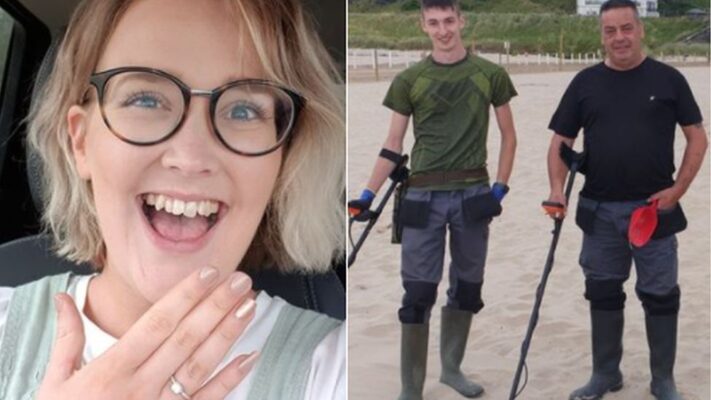 Beth Aithne’s appeal on Facebook was shared more than 3,000 times and eventually caught the attention of Andy and Ryan McCloy

A father-and-son metal-detecting duo have helped a distraught bride-to-be recover her lost engagement ring from a Co Derry beach.

Andy and Ryan McCloy came to the rescue after Beth Aithne launched a social media appeal on Sunday evening.

Beth’s post was shared more than 3,000 times on Facebook and eventually caught the attention of the pair.

“Complete strangers were lighting candles for me and coming down to join the search,” Beth told BBC News NI.

Beth and her fiancé Ryan Clarke had both been enjoying a day off from work at Downhill Strand when she mislaid the diamond ring.

“We went down to the beach and I took off my earrings, watch and then the ring and set it down on a towel,” she said.

“I went to put the items in the car for safe keeping, but I must have dropped the engagement ring on the way to the car without realising

“It was only when we went to a cafe afterwards did we realise it was missing.”

Beth and Ryan stayed until 10.30 pm on Sunday, searching through the sand in a desperate attempt to find the ring.

With no luck locating the precious jewellery in the fading light, they left dejected, fearing it would never be found.

“I felt so empty, Ryan and my mum, who lives in America, helped design the ring – it meant everything to me as it was my connection to home,” Beth said.

Beth’s boss let her leave work early the next day to continue her search for the ring. 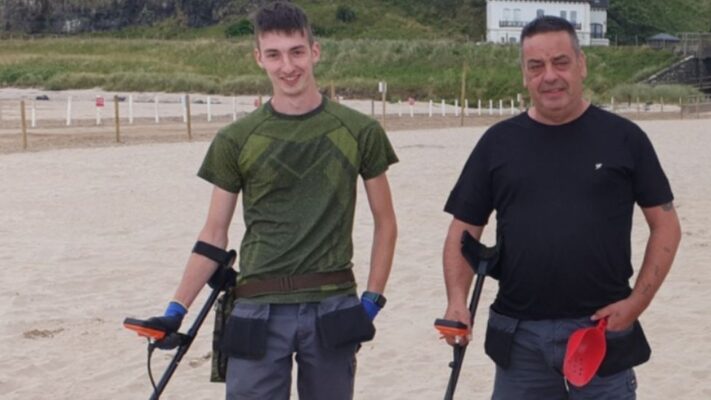 The couple rented a metal detector and began scouring the area once again.

After Beth asked the beach’s lifeguard if anyone had seen a ring, he said two men had been there since 05:00 BST searching.

Andy and Ryan McCloy had been using their professional-grade metal detectors after seeing the post on a north coast community group Facebook page.

“They both had these huge fancy metal detectors that they use to search for coins and lost items as a hobby,” Beth explained.

“They made the one we rented look like a toy.”

They were assisted by other helpers who came along after spotting the plea online.

“One lady with a rake showed up and began raking the sand to help bring it to surface,” Beth said.

But after several hours the search team feared it might be time to admit defeat.

“We were just standing there chatting, and Ryan McCloy was sort of swaying his metal detector when we just heard the smallest of beeps,” Beth said.

“Initially we dismissed it, thinking it was probably just a can lid, but then Ryan started digging and digging and after dislodging about a foot of sand we eventually saw the silver band from the ring”.

“It really was like finding a needle in a haystack – it was incredible.”

Beth and fiancé Ryan said they were indebted to the father-and-son duo, who are now invited to their wedding.

Beth also thanked the thousands who shared her post online and everyone else who gave up time to help.

“I was also just so overwhelmed by how everyone came together to help find the ring,” she said.

“We just couldn’t believe how kind the people of the north coast were.”