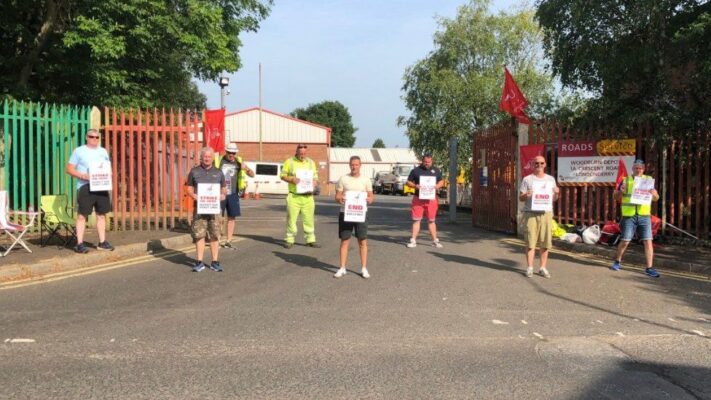 STAFF at a Department for Infrastructure (DfI) maintenance depot in Derry have gone on strike.

A trade union has said this is part of a dispute with the department over how it has handled staff complaints.

About a dozen workers took to the picket line at the Woodburn site in the Waterside area of the city on Thursday as part of 24-hour industrial action.

The DfI has said “a formal process is now underway” and management has engaged with staff and trade unions.

Unite the Union’s Gareth Scott has said “our issue is very much to do with the failings of the department to deal with complaints”.

Mr Scott said the strike action will cause “a disruption to any work that was scheduled for today”.

Workers at the depot are responsible for road maintenance on A and B roads, maintaining kerbstones and grass cutting.

Mr Scott accused the department of “failing to carry out their own procedures correctly”.

“The department have done nothing which has forced these employees to feel the only course left is to highlight this through industrial action,” Mr Scott told BBC Radio Foyle.

He said the union are “currently investigating whether this is a wider issue” at other depots and said if the issue is not resolved then “there will be an escalation in action”.

In a statement, a spokesperson for the department said that complaints were lodged earlier this year and that management attempted to have them resolved informally.

The spokesperson added that “there are well established procedures for staff to follow when they experience an issue at work”.

The DfI said they comply with the Northern Ireland Civil Service policies and procedures on the management of human resources and that they “have been engaged in this process from the beginning.”