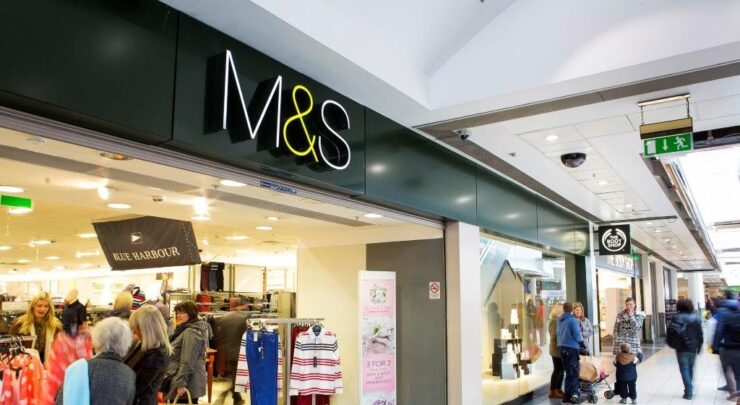 MARKS & Spencer has warned it is already cutting Christmas products in the North of Ireland due to concerns over forthcoming post-Brexit customs checks.

Mr Norman said current “pointless” checks with the Republic of Ireland were “threatening” to its business.

He called for a “common sense approach to enforcement.”

The UK is expected later to warn the EU it is prepared to unilaterally override the Brexit arrangements for Northern Ireland if a simplified agreement cannot be reached.

Right now, supermarkets who send products there from Great Britain face only light-touch checks, under a so-called “grace period” which delayed some of the new processes. That runs out at the end of September.

The Northern Ireland Protocol helps prevent the need for checks on the island of Ireland’s internal border.

But in the first warning from a major retailer on the scale of the potential problems, former Conservative party MP Mr Norman said once light-touch export checks end, there will be “gaps on the shelves”.

“This Christmas, I can tell you already, we’re having to make decisions to delist product for Northern Ireland because it’s simply not worth the risk of trying to get it through,” he said.

“We’ve already made that decision. We’re waiting to see how serious it’s going to be but if it’s anything like southern Ireland (the Republic of Ireland), and at the moment it’s set to be, then it’s going to be very, very serious for customers.”

Marks and Spencer is a major employer in Ireland, with more than 4,000 staff.

“There is no other outcome for consumers in Northern Ireland in the end other than higher prices, given the inflationary pressures being put on to retailers by the regulatory regime,” Mr Norman wrote.

“Being able to keep the show on the road, let alone growing, is going to be very challenging,” he added.

Mr Norman told the BBC that “pettifogging enforcement” of the rules required M&S to employ 14 full-time vets, “simply ticking boxes and filling out forms”, in order to certify its products.

“Sandwiches typically require three veterinary certificates to get through,” he said.

Because of the way the system worked, M&S had had to give up exporting half its sandwich range to Ireland, he said.

If forms were filled in incorrectly, that meant delays, with everything on paper and nothing digital, Mr Norman said.

“If one page is blue instead of black typeface, the entire wagon is turned away,” he added.

Mr Norman said that if the same regime was replicated in the North of Ireland at the end of September, it would be “incendiary” for the public there.

Mr Norman said M&S was one of the largest UK-based retailers operating in Ireland as a whole and played “a disproportionate role” in Northern Ireland.

“Our market share in Northern Ireland is almost double our share on the UK mainland. In part, this reflects our history as the only major UK retailer that committed to trade and invest continuously through the Troubles,” he said.

“Our commitment and involvement with the people and communities of Northern Ireland remains strong. We are also a major employer and investor with over 4,000 people employed directly by M&S and many more in our supply chain.”

He added that last year, M&S invested more than £10m in the business in Northern Ireland.

However, the issues raised by the current customs arrangements, in which Northern Ireland remains part of the EU Single Market while the rest of the UK has left, were “very threatening to our business”, he said.

“But we have to recognise as well that Britain decided itself to leave the single market of the European Union, to apply trade rules, to apply red tape to its goods that are leaving Britain, to goods that are coming into Britain,” he added.

The EU has said a temporary Swiss-style veterinary agreement for the North of Ireland, in which the UK continues to follow EU agri-food rules, could be a solution, but it has been rejected by the UK.

In his letter, Mr Norman said he understood why the UK government was “not favourably disposed” to this solution, although he added that it was “by far the best way of delivering a smooth trade flow”.

Regardless of this, he added, many problems could be solved by a willingness to overlook “trivial” errors in paperwork and efforts to set up a “trusted trader” scheme.

“Any scheme should start on the basis that we are prepared to follow EU standards for products going to Northern Ireland,” he said.

“The debate is not about meeting standards, this is about what we are required to do to show we are compliant.”

Downing Street said Mr Norman’s letter was a “stark warning” of “the fundamental problems with the Protocol”.

“That is why we need to urgently tackle these issues, to ensure there is minimal disruption to people’s lives in Northern Ireland, as the Protocol itself intended,” it added.

It plans to set out details later on its approach to the NI Protocol in Parliament.