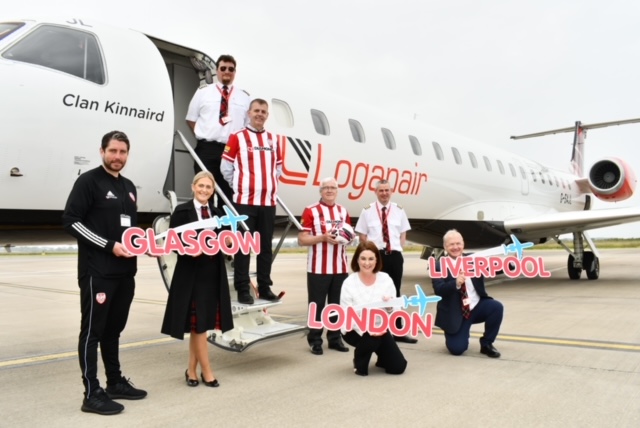 The football club regularly hosted fundraiser events pre-pandemic to help its junior and female teams cover expenses such as travel, training and kits.

During the pandemic, the teams have seen expenses double, with extra requirements needed to ensure covid restrictions are adhered to, while fundraising efforts have dropped off.

Teams must now use two buses instead of one to allow for social distancing traveling throughout Northern Ireland and the Republic of Ireland, with additional costs to ensure health and safety.

The team has launched a monthly draw where supporters, football fans, and those looking for some competition can pay £10 for the chance to win cash prizes.

Members of the draw are in with the chance of winning £850 for first place and £300 for second place, with Loganair return tickets now up for grabs for the next three months.

The free flights will be available on Loganair’s routes from the City of Derry Airport, with football fans particularly interested in trips to Glasgow, Liverpool and London to catch a game in person as restrictions ease.

Colin Gracey, Sales Manager at Loganair, said: “As with many industries, football has been greatly impacted during the pandemic and teams which rely heavily on help from supporters are feeling the strain from a pause in fundraising efforts.

“We are thrilled to be able to support Derry City Football Club’s fundraising efforts with tickets to Liverpool, Glasgow and London Stansted”

“The generous prize offering of 2 Loganair flights each month during July, August and September is a major boost for our fundraising efforts this year.”

George also thanked City of Derry Airport for their continued support and sponsorship over recent years.

To sign up for the draw, please visit: https://www.derrycityfc.net/monthly-draw/