DERRY SDLP politician Sinead McLaughlin has described a proposed amnesty by the British Government for troubles-related crimes as a “betrayal of justice”.

Mrs McLaughlin made the comments at Stormont on Tuesday after the Assembly was recalled from recess by an SDLP petition on the amnesty proposals.

Said the Foyle MLA: “I find it hard to adequately express my disgust at the British Government’s plans that denies victims justice.

“How dare Johnson and Lewis attempt to frame their amnesty proposal as a step towards reconciliation.

“I cannot begin to imagine how tough last week’s announcement in Westminster must have been for the victims and families of our bloody and murderous conflict.

“I cannot stand here today without mentioning Bloody Sunday. Innocent civilians were slaughtered on our streets. Families, friends and neighbours were left in turmoil.

“It was unlawful, plain and simple. Despite this, families have been forced into spending a lifetime fighting for justice that continues to be denied to them.

“The injustice of Bloody Sunday is in the heart and soul of our people in Derry.

“This intergenerational trauma cannot simply be wiped away at the behest of a British Prime Minister.

“I am proud that the MP for Foyle bravely stood on the floor of Westminster and named Soldier F, but I am also ashamed that he had to, as it became clear that the UK government had decided to put justice beyond the reach of the Bloody Sunday families.

“State actors and paramilitaries brought injustice to too many people in our communities. Paramilitary death gangs preyed on our young people and stole their futures. 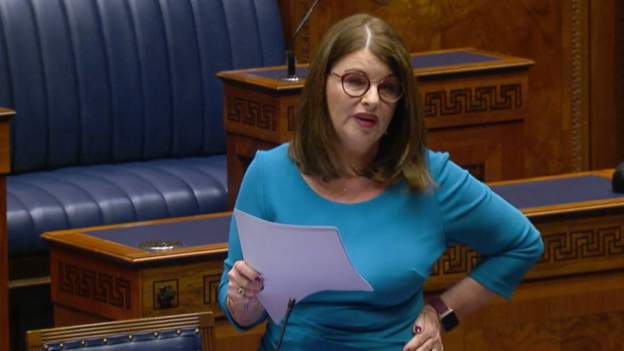 “The bombing and murdering campaigns of these organisations is still having a profound impact on our communities today.

“There is not a statute of limitations when it comes to losing a mother, father, wife, husband, brother, sister. Yes life goes on, but so does grief.

“Today I think of the grief of the Gillespie Family in Derry. I want to know exactly who murdered Patsy Gillespie, who gave the instructions that he was to be murdered, who was leading the IRA in Derry at the time, who commissioned his death, why was he picked out, are his murderers still living and working in Derry?

“These are important questions that need answered and justice served.”