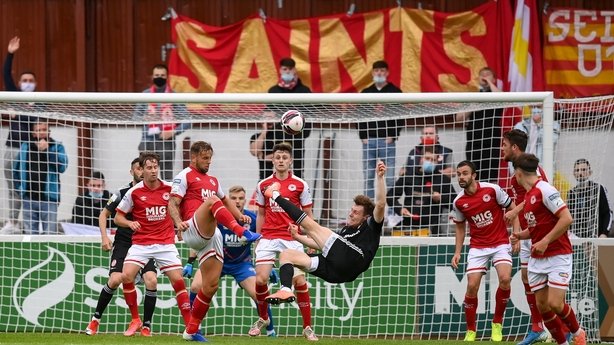 Cameron McJannet of Derry City has a shot on goal

St Patrick’s Athletic returned to a share at the top of the Premier Division as they endured half an hour with ten men to edge out Derry City at Richmond Park on Friday night.

Chris Forrester’s goal midway through the first half proved enough for Stephen O’Donnell’s injury and suspension-hit side to seal their first win in three and moved back to the summit.

The Saints saw Jamie Lennon dismissed for a second yellow card on the hour – their fourth dismissal in three games – to set up a nervy finish but they held out for a deserved three points.

With the two Rovers out of action due to European commitments, St Pat’ss had a chance to lay down a marker in their absence and get points on the board.

Familiar disciplinary problems put that in jeopardy as what had been a relatively straightforward route to victory turned into a frantic defensive effort after the break.

O’Donnell was already without key defenders Ian Bermingham and Lee Desmond after their dismissals in the defeat to Bohemians last week.

That meant midfielder Jamie Lennon and winger Jay McClelland were deployed in the full-back roles as an increased attendance of 500 filed into the Inchicore venue.

The changes in personnel did little to halt the Saints’ typical game and they slowly took control of the game as the first half wore on.

They had an early scare as Junior Ogedi-Uzokwe, who returned on loan from Dundalk during the week, jinked inside Sam Bone and flashed a shot goalwards, but straight at Vitezslav Jaros.

It was the only save the on-loan Liverpool stopper would have to make, however, as the Athletic began to dictate the tempo.

Burns was a constant threat cutting in from the right, and it was no surprise the goal came from his side after Darren Cole coughed up possession in his own half to Robbie Benson.

Burns saw his initial shot blocked, but his subsequent cross was touched down by Rónán Coughlan, and Forrester emphatically planted the ball in the top corner from 15 yards.

Pats pushed on after the break, with Benson increasingly pivotal, and he picked out Burns with a fine cross the winger put over, before Matty Smith curled wide from the captain’s pass.

Smith really should have doubled the scoring as Burns’ cultured left boot picked him out in the six yard box, but this time he headed over.

The game turned on the hour as Lennon was shown a second yellow as he trod on James Akintunde’s foot.

Derry brought on an extra attacker in Evan McLaughlin to force the game, while 17-year-old James Abankwah was handed a Saints debut at right back on the week he signed his first pro deal. 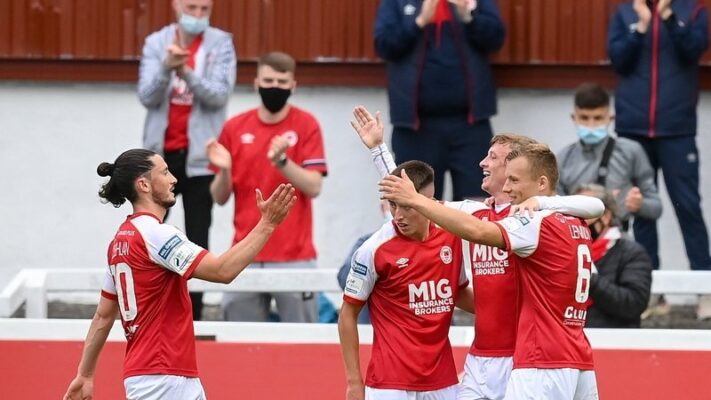 Both youngsters would be prominently involved, with Abankwah looking particularly assured, though McLaughlin will curse pulling a shot wide in the final minutes.

Aside a speculative Lafferty volley, the home side held out with relative ease to inflict a second defeat of Ruadhrí Higgins’ tenure and move back to the top of the table.