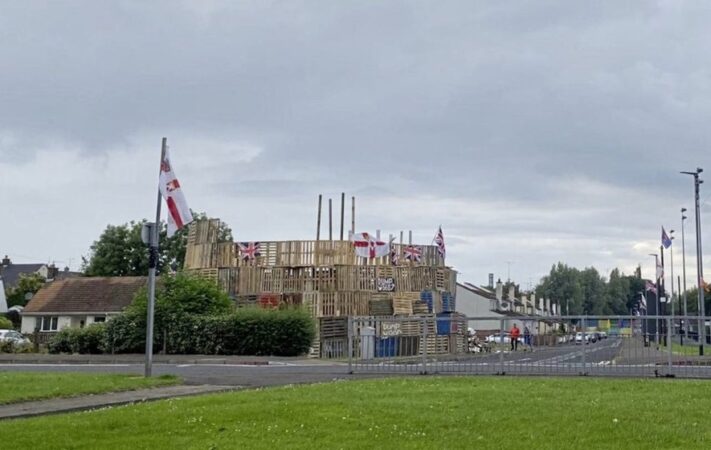 The bonfire in Limavady built close to homes

CONCERNS have been raised about an 11th night bonfire built close to homes in Co Derry.

East Derry Sinn Féin MLA Caoimhe Archibald said she has contacted by residents about the pyre at Greystone Road in Limavady.

The MLA said that meetings have been held with the PSNI and the Housing Executive, on whose land the bonfire is located.

“This bonfire has forced residents to move out of their homes in recent years because it is so close to their houses,” she said.

“This year the size and proximity of the bonfire are again causing concern and it is vital that agencies with responsibility step up to protect residents and property.

“The police and the fire brigade must have the resources they require to ensure the safety of residents.

“Protecting lives, property and the environment must be the priority.”

A spokesman for the NIHE said it does not give approval for bonfires on its land.

“We have been working closely with the local community, the council, the PSNI and the Northern Ireland Fire and Rescue Service to try to ensure that the bonfire is safe and does not damage people’s homes,” he said.

A spokesman for the PSNI said: “While police have no specific legislative power to remove bonfires or waste which has been illegally disposed of at sites, we will support other statutory agencies and landowners to carry out their role if required.”