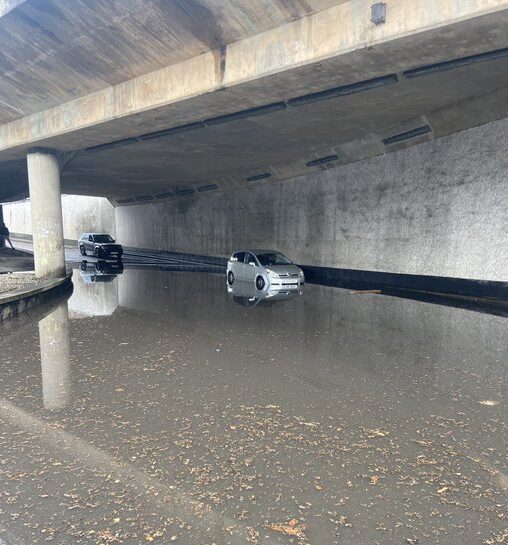 It follows heavy downpours across the North West on Sunday which led to flooding in parts.

The Met Office warning remains in place until 8pm tonight.

Said a Met Office statement: “Slow moving heavy, occasionally thundery, showers will give a risk of flooding this afternoon and early evening.”

The new waiting room area at Altnagelvin Hospital’s Emergency Department has been affected by the torrential rain rain on Sunday afternoon.

As a result the waiting room had to be temporarily closed.

A spokesperson for the Western Trust said: “Services at Altnagelvin’s ED remain unaffected.

“However, due to a reduction in space we would emphasise the importance of coming alone when attending the ED. Exemptions apply to vulnerable adults with communication difficulties and also for children.

“We are working to resolve this at present and apologise for any inconvenience caused.”

A number of businesses across the Waterside were also affected by rain water entering the premises, while some roads including the lower deck of Craigavon Bridge were flooded for a time.