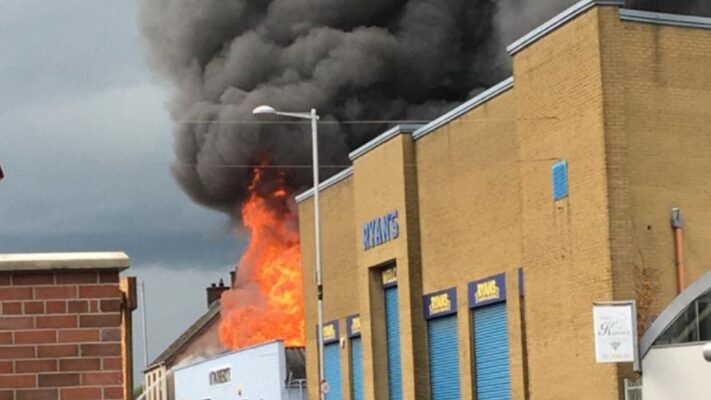 Fire at undertaker’s in Strabane on Sunday, July 4. Pic By Danny Corry

THE owners of the coffin makers that was destroyed by a fire after their property was struck by lightning have said they are “absolutely devastated”.

The Strabane business caught fire on Sunday afternoonn as extreme weather brought chaos in parts of the country.

It is believed the inferno along Railway Street was started after a bolt of lightning struck the commercial premises as locals said they heard a loud bang just before the blaze broke out.

A lightning strike is one of inquiry being investigated by the Fire and Rescue Service’s as it probes the inferno at O’Doherty & Sons.

The FRS remained at the scene on Monday morning, but it has been able to scale back its operation after 80 firefighters, 10 fire appliances and four specialist appliances from Derry, Donegal and across the North of Ireland were present at the height of the fire.

The PSNI said Railway Street will remain closed for “the majority” of Monday and told the public to avoid the area if possible as delays are expected.

In a statement, business owner Manus and Charles O’Doherty expressed their devastation that the fire destroyed their “much loved family business”.

“We are relieved that no one was hurt or injured in this fire,” they said.

“O’Doherty and Sons Ltd has been a part of Railway Street since 1908 and we’ve been part of the fabric of Strabane town.

“It’s therefore a sad day for us to see so much of our family history destroyed by this fire.”

They also thanked the NIFRS for their efforts in dealing with the blaze, as well as their employees, customers, suppliers and the local community for their support.

“We will take the next few days to reflect on what happened and plan for the future along with our dedicated and hardworking staff,” they added.

District commander Andy Russell said firefighters will remain at the scene for the “near future” and hopes an investigation into the blaze can be concluded within the next 24 hours.

He added that the incident could have been much more “horrific” if employees were inside the property when the fire started.

“It was a substantial fire on this commercial premises in Strabane,” he told BBC Radio Ulster’s Good Morning Ulster.

“We had 10 pump appliances and four specialist appliances from throughout Northern Ireland attend.

“I have no doubt that the hard work of the responding crews ensured that this fire was maintained and managed to stop it spread to surrounding commercial premises and residential premises in the heart of Strabane.”

Mr Russell said it would be an “unusual” case if the blaze was started by a lightning strike but explained the fire investigator will carrying out their enquiries when it is safe to do so.

“It will depend on how long it can take for our fire investigator to enter the premises [before we know the cause],” he continued.

“The heat within that premises will have to cool down substantially to allow us to enter and as well as that there is concerns in relation to the structural integrity of the building.

“Therefore, we have to make sure it is safe for him to enter before the investigation can be undertaken, although I would like to think in the next 24 hours we will have an outcome.”