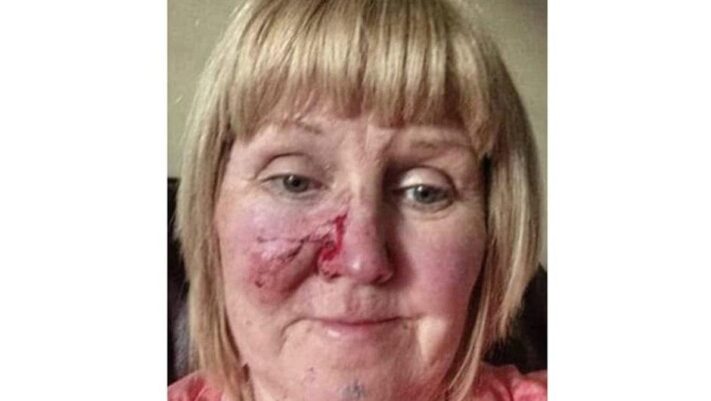 A primary school teacher was left with horrific injuries by a gang who were trying to steal her dogs last weekend.

Anne Marie McGlynn had been walking her King Charles Spaniel and Collie along the Ballycolman Road in Strabane at around 8.30 am last Sunday when she was approached by three men.

Speaking of the attack, the 54-year-old said the men shouted “give us the dogs” but when she refused, they started to repeatedly punch her.

Ms McGlynn’s brother, Paul McClay, told the Irish News the gang punched his sister in the face at least three times when she “fought back” after they “physically tried to take the dogs.”

Ms McGlynn said the men spoke with local accents and that she was only saved when a passing motorist saw what was going on and stopped to help, before driving her home.

It is understood the men made off empty-handed in a white van heading towards the Ballycolman housing estate.

Mr McClay said the dogs were part of the brave teacher’s “family”, and described the attackers as “selfish cowards attacking a middle-aged woman in broad daylight”.

He added: “Our family’s hope is to find out who done this and to bring them to justice, so that this doesn’t happen again”.

There has been a sharp rise in the number of dog thefts and attempted dog threats in the North of Ireland since the pandemic began, with prices rising sharply on websites and high demand in dog rehoming shelters.