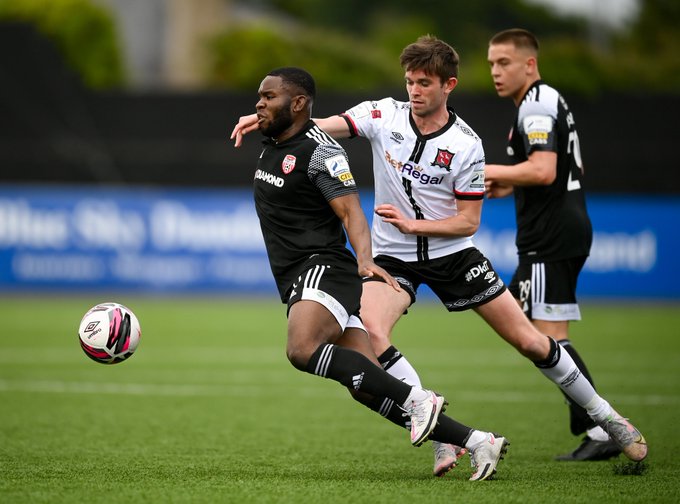 DERRY City just didn’t have the the magice or the firepower to defeat Dunalk as the Co Louth side continued its mini-resurgence.

Vinny Perth’s fortunes continued as they leapfrogged Derry City in the Premier Division table with victory over the Candystripes at Oriel Park on Friday night (kick off 7.45 pm).

Goals in either half from Daniel Kelly and Patrick Hoban ensured the Co Louth side gave a good send-off to long-serving captain Chris Shields – playing his last game for the club he joined in 2012 ahead of a move to Belfast side Linfield.

The home side were made work hard for the result, however after Eoin Toal pulled a goal back on the hour mark but despite good late pressure from Ruaidhri Higgins’ side they couldn’t find the magic required to clinch an equaliser.

Dundalk had dominated the match for long periods but but for some top saves from Nathan Gartside they could well have had more goals on the score sheet.

After a first win away to neighbours Drogheda Utd on Monday this was just the second time all season that the Lilywhites have won back-to-back games with this result taking them up to sixth in the table.

Question marks remain off the field at Oriel Park but Perth has steadied the ship in his nine days in charge. Keeping it on course without the talismanic Shields will be a real task going forward.

The home side were on top right from the off with Patrick McEleney dipping an early shot just over before both Patrick Hoban and Sean Murray were denied by Nathan Gartside in the space of five minutes.

The 23-year-old goalkeeper then produced two stunning saves to deny Hoban on both occasions.The first came on 28 minutes when Michael Duffy’s shot was deflected up into the air with Hoban’s header brilliantly turned around the post by the Northern Irish U-21 international.

He was then superb again six minutes later when he somehow clawed Hoban’s header over after he had been picked out by Duffy’s left wing cross.

The breakthrough finally arrived in the 37th minute with Gartside partially at fault. A shot from distance by Duffy was spilled by the goalkeeper with Daniel Kelly on hand to punish the error with a close range tap in for what was his fourth career goal against the Candystripes.

Despite a couple of blocked efforts, it would take until the 44th minute for the visitors to register a first shot on target but Joe Thomson’s free kick from the left was easily dealt with by Alessio Abibi.

Ciaran Coll and Darren Cole were introduced by Higgins at half-time as Derry switched to a 3-5-2 formation and it almost paid immediate dividends within four minutes of the restart however when Thomson’s cross from the right was met by Daniel Lafferty in-rushing at the back post but the full back couldn’t direct his effort on target.

Dundalk were next to threaten on 57 minutes when McEleney slipped Duffy in on the left for a shot that was turned around the post by Gartside.

From the rcorner Duffy’s delivery fell to Raivis Jurkovskis, whose bicycle kick attempt wa adjudged to have been handled by Cole.

Referee Rob Harvey immediately pointed to the spot with Shields handing the ball to Hoban, who rewarded his captain’s faith by drilling under the despairing dive of Gartside to the bottom right hand corner.

Dundalk’s 2-0 lead would last a little more than two minutes, however, as Derry pulled one back on the hour mark.

After James Akintunde was denied by Abibi, Thomson’s follow up was deflected over but from the resulting corner captain Toal was on hand to head home.

Thomson then had a big chance to level three minutes later but fired over before Toal came to his side’s rescue moments later when he made a great last ditch challenge to deny Duffy after he looked to have been played in over the top.

City hdad another let off in the 70th minute when Duffy teed up substitute Han Jeong-woo for a shot which the South Korean pulled agonisingly wide from 12 yards. 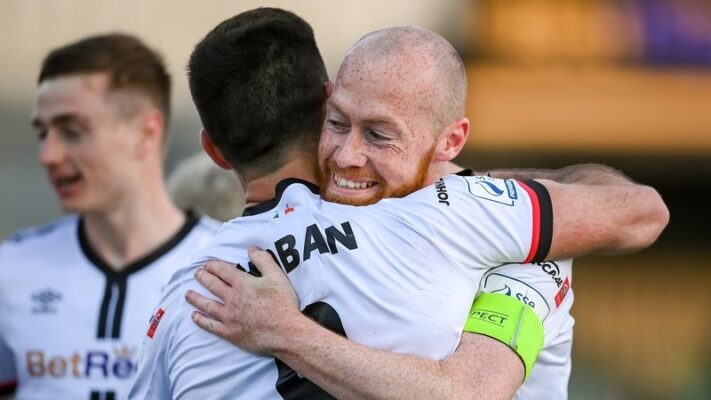 Duffy was then denied by the legs of Gartside with a left foot shot from the left 10 minutes later before substitute Patrick Ferry fired into the side netting at the other end with three minutes remaining.

Ferry then had another half chance deep in stoppage time after the ball pinged around the Dundalk box but it was turned behind by Abibi who then punched the resulting corner clear to ensure the win.