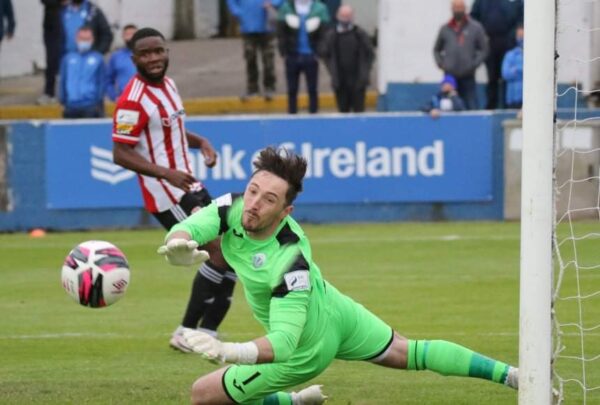 CLASSY and controversial were the best ways to describe Will Patching’s brace as Derry City continued their fine away form with victory in the north-west derby at Finn Park.

The former Manchester City academy player put his side ahead with an early penalty which the home bench fiercely contested and, after an equaliser from Ethan Boyle, then curled a fantastic free-kick a minute before the break to put Derry 2-1 up.

Eight minutes in, the visitors got ahead with Patching putting a penalty into the bottom corner after an award when Boyle was penalised for a push on David Parkhouse and referee Neil Doyle pointed to the spot – much to the disdain of the 100 home supporters permitted entry for the first time this season.

Ollie Horgan wondered aloud if that was a foul would a game ever get finished. It was tough on the hosts, who were vocal in their complaints, but having started the brighter got a deserved equaliser on 16 minutes.

Babatunde Owolabi had terrorised Sligo Rovers for 45 minutes three weeks beforehand and the Belgian was at it again against Derry, driving just over the crossbar on 21 minutes. At the other end Parkhouse, at the other end, headed wide perhaps not appreciating how good the opening actually was.

Adam Foley led a breakout for the hosts, running most of the field only to shoot wide, and Patching drew a useful save from Mark Anthony McGinley in the Harps goal, with Owolabi doing the same with Nathan Gartside at the River End.

Patching then worked his magic with a free from the edge of the area right before the break to edge Derry City back in front on the interval, after being fouled by Mark Coyle.

Frantic first half. Frantic second. With Derry playing a high line, Owolabi was still providing an outlet and when Foley found himself in space only to see his shot trickle agonisingly wide having deflected off Eoin Toal.

Derry had chances too, like when Patching from a free down the left, called McGinley into action again.

The best chance of a second Harps equaliser came from another McNamee corner, Shane McEleney miscued and managed to only steer the ball back across goal some 20 minutes from time.

Boyle, twice, was also off target as Derry struggled to deal with the deliveries from their former captain, although Gartside wasn’t overly tested.

Since Ruaidhrí Higgins came in as manager, Derry now have 16 points from 18 on the road, whilst neither he nor Declan Devine have yet to taste victory at home. Harps have only a point from their last 15 at home. Maybe, when you look at that, it was predictable, whilst in reality it was anything but.