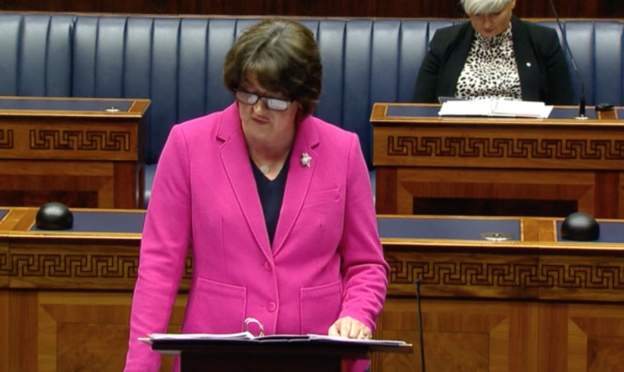 ARLENE Foster has urged political parties in the North of Ireland to stick to a language and cultural deal they agreed to in January 2020.

Speaking in the NI Assembly ahead of her resignation as First Minister at 1 pm, Mrs Foster said the deal was “the only model for success”.

Her departure came six weeks after she was ousted as DUP leader.

In her statement to the Assembly, she also said she would continue to speak up for women in public life.

She said she would now spend more time with her family “whether they like it or not”.

When Mrs Foster resigned, Sinn Féin’s Michelle O’Neill also lost her position as deputy first minister because the roles are a joint office.

There is now a seven-day period for the approval of a new first minister and deputy first minister by Sinn Féin and the Democratic Unionist Party (DUP).

Sinn Féin has suggested it may not support a new DUP first minister unless legislation on the Irish language is approved by ministers before 10 July.

Mrs Foster said parties should support the deal on culture – which included language legislation – which was included in the New Decade, New Approach deal which restored devolution to Northern Ireland in January 2020.

She said: “My team and I sought and secured a cultural package that would see a range of measures to advance identities and protect them for future generations.

“This is the only model for success – not one step forward for some and one step back for others.”

The deal included an Office of Identity and Cultural Expression, an Irish language commissioner and a commissioner to enhance and develop the language and culture of the Ulster-Scots/Ulster-British tradition.

She stood down as DUP leader after an internal party revolt, with at least 22 assembly members (MLAs) and four MPs signing a letter of no confidence.

Her departure prompted a series of resignations within the DUP, with several councillors and party members expressing their anger about how she was ousted.

Speaking last week, Mrs Foster said she was sad about the manner of her departure, but was “looking forward” to new possibilities.

Stormont Speaker Alex Maskey said the Assembly’s business committee would meet on Tuesday be asked to consider scheduling an Assembly sitting to nominate a new first minister and deputy first minister next Monday.