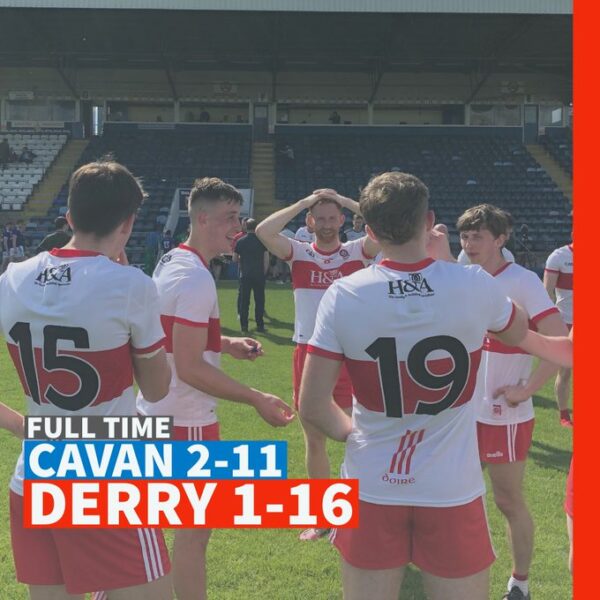 Allianz League: Derry march on with win over Cavan

written by cassoscoop May 29, 2021
ShareTweet

DERRY’s good run in the Allianz League with a two point win over Cavan at Kingspan Breffni Park this afternoon (throw in 2.30 pm).

And in those opening three games Rory Gallagher’s players have scored a staggering six goals and 50 points.

That brings his tally over the three games to two goals and 13 points.

Longford, regular Ulster-slayers in the qualifiers and something of a bogey-team for Derry over the past decade, were demolished 0-21 to 0-05 on the opening weekend.

Fermanagh had beaten the Ulster champions Cavan on the same weekend so they can’t be dismissed as inveterate no-hopers but they were annihilated 5-13 to 0-09 in Owenbeg last Sunday.

The Breffni contest was a topsy turvy affair as two points apiece from McGuigan and Niall Loughlin helped the visitors lead 0-5 to 0-0 after nine minutes before Cavan replied with four straight points.

Gearoid McKiernan’s goal on 25 minutes put Cavan ahead as he rose above Derry keeper Odhran Lynch to flick a high ball to the net before he quickly added another free.

But the Oak Leafers were back on terms almost immediately as the excellent Loughlin blasted past Raymond Galligan after a mazy run.

After edging 1-7 to 1-6 ahead in first-half injury-time, Derry hit six unanswered points in the third quarter stunning long-range scores from McGuigan and energetic midfielder Emmett Bradley.

Once again, the match then turned as Cavan outscored Derry 1-4 to 0-1 in the 14 minutes after the water break. 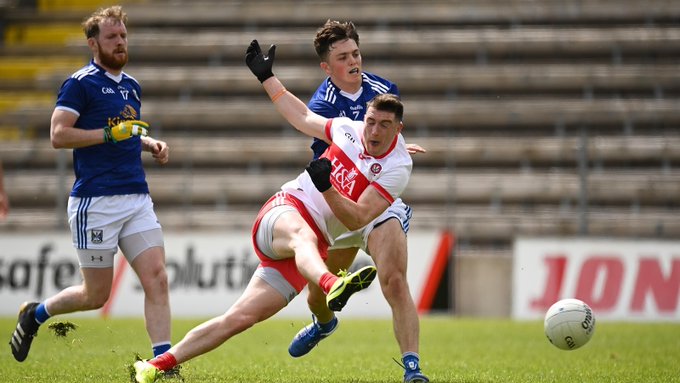 Reilly’s palmed 66th-minute goal after a Padraig Faulkner long-range effort had come back off the woodwork before being played in again by Oisin Kiernan, helped Cavan cut the margin to only two.

But while a McKiernan free left the minimum between the sides a minute later, McGuigan’s seventh and eighth points closed out the match.

The Slaughtneil man’s final score was a sensational free from the right touchline as his sweet left-foot again delivered.

Over at Brewster Park Fermanagh drew with Longford which means Longford finish bottom of the Division North table and head to the relegation play-offs with Cavan.