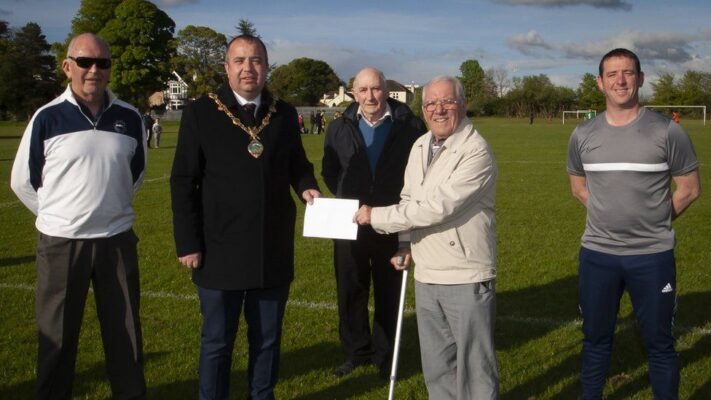 written by cassoscoop May 23, 2021
ShareTweet

Derry’s mayor Councillor Brian Tierney is covering the cost of the pitches needed to host this season’s Derry and District league matches.

IT is the Derry grassroots football league that has nurtured future Premier League players and developed international footballers.

As youngsters, so too did James McClean, Paddy McCourt and Shane Duffy.

Amid the distractions of modern life, many players’ interest in playing Sunday morning football was declining.

A few years ago, the league’s membership had slumped to only seven clubs.

“It was, at that stage, panic time,” said Mr Barrett.

“But thankfully there’s been a resurgence and the number of teams on the rise again.”

That is in part, he added, “because lockdown and the pandemic has reminded so many players that they actually love playing the game”.

This is a league of some pedigree.

“Every player that came from Derry to have played international football, every one, all played in the D&D,” Mr Barrett said.

Former Derry City star and Northern Ireland international Liam Coyle is among them.

He grew up hearing the stories of his uncles and his father Fay – part of the 1958 Northern Ireland World Cup squad – playing in the D&D.

His formative footballing aspirations were not of playing for any of the English, Scottish or European giants of the game. Instead he dreamed of playing for Brandywell Harps in the D&D.

“You have to remember that this was when Derry City was out of football so the D&D was a godsend, the saviour of football in the city,” said Mr Coyle.

In 1972 – a year regarded as one of the worst of the Troubles in Northern Ireland – a supporters’ bus from visiting Ballymena United was burned on a visit to play Derry City.

Teams refused to travel to the club’s Brandywell ground and the club moved their home games to Coleraine for a year before severing ties with the Irish League.

After years in the footballing wilderness, Derry City was accepted into the Republic’s League of Ireland in 1985.

Mr Coyle added: “You had the very best local players in the D&D then, every side had a senior player or two, players who were at Coleraine or Finn Harps or Sligo turning out for them on a Sunday morning.

The crux of the Derry City team to win Ireland’s domestic treble in 1989 – the only side ever to do so – were schooled in the wiles of the game in the D&D, he added.

The league’s 2021 season kicked off earlier this month.

For the next three months, matches will be played on council-owned pitches across the city and the league’s administration is being looked after by an army of volunteers.

In any other non-pandemic year, they would have been honoured with a civic reception in the city’s Guildhall to mark the centenary, Derry’s Mayor Brian Tierney said.

Instead, he is paying the costs of the pitches the league’s now 17 teams will play on this season.

He said the D&D has “played a central role in community of life” over the past 100 years.