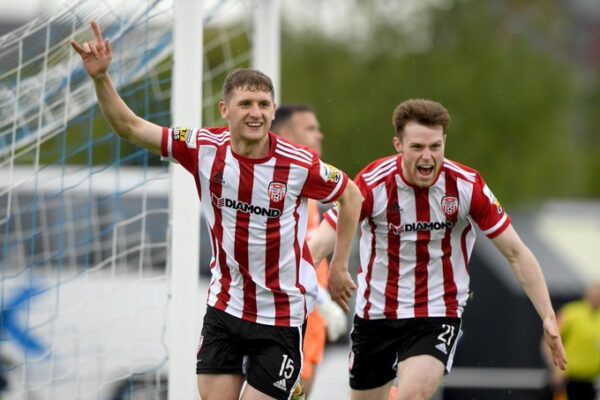 DERRY City got back to winning ways with a 1-0 win away to Waterford this evening.

Ronan Boyce’s first half header was enough for Derry City to bag the three points and keep up their impressive form on the road.

Although Waterford were much more in the game after the break, in truth they could have lost by a bigger margin, as Derry had enough chances in the opening 45 minutes to have ended the game as a contest.

The home side didn’t get off to the best of starts as they fell a goal behind in just four minutes.

Bircham decided to bring former Ireland international goalkeeper Brian Murphy straight back into the team, but it was the ex-QPR shot-stopper that gave Derry a free-kick which resulted in the opening goal.

Murphy brought down James Akintunde close to the right hand corner flag and from Will Patching’s resulting free-kick, Boyce headed home, his second goal of the season, at the near post.

Derry went close to doubling their lead on 19 minutes as the impressive Patching won possession from Darragh Power, before seeing his 20 yard strike parried away by Murphy and the Waterford keeper did well to deny Akintunde with the follow-up chance.

Murphy was called into action again on 30 minutes as Patching’s 35 yard long-range strike nearly caught out the keeper, but he managed to gather the ball at the second attempt.

Waterford went close to levelling things with their first effort on goal on 42 minutes, but Shane Griffin’s 25 yard free-kick was superbly kept out by a diving Nathan Gartside.

The home side should have equalised on 57 minutes as Jamie Mascoll’s right wing cross found Adam O’Reilly, but from close range he headed over the bar.

On 86 minutes another teasing Patching delivery from the left found Eoin Toal at the back post, but the big skipper’s header flew just wide.