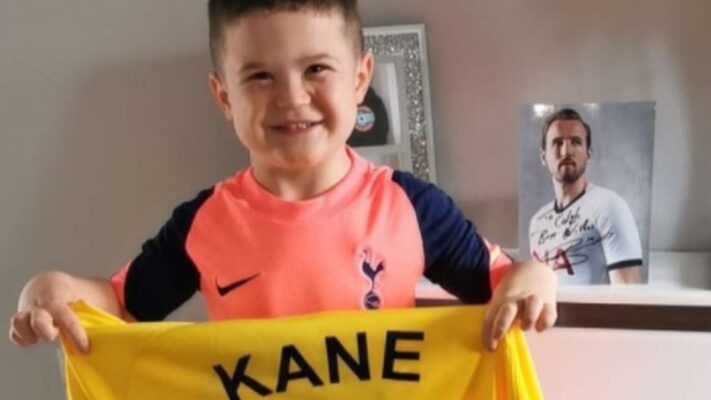 A five-year-old boy from Derry has received a special gift from one of his sporting heroes after undergoing major brain surgery in April.

Caleb Toland was diagnosed with chiari malformation, a condition where the lower part of the brain pushes down into the spinal canal, when he was one.

But the Spurs-mad family were shocked when Caleb was sent a signed shirt.

The Greenhaw Primary School pupil required surgery because his brain had started to descend downwards because of his condition, which resulted in a cyst developing on his spine.

“Essentially his brain doesn’t fit in his skull, it is restricting fluid and this operation was to help ease his symptoms,” his father told BBC News NI.

“Wee Caleb has had it tough, he has Tourette’s and obviously being couped up with lockdown and now this (surgery).

“But one of the things that has always helped him with everything has been the football – he is obsessed.”

Mr Toland explained that the whole family were very anxious about Caleb’s surgery and in an attempt to lift his mood, reached out to some of his son’s footballing idols.

The footy-mad five-year-old did not just receive one signed shirt, he was inundated with video messages and other signed memorabilia from football players, past and present, wishing him well on his post-surgery recovery.

“He got a shirt from Harry Kane, James McClean sent him a shirt, Toby Alderweireld sent him a video message, Robbie Keane as well and even Glen Hoddle,” he said.

“Caleb is a bit too young to know who Glenn Hoddle is, but myself and my dad are both life-long Tottenham fans and we couldn’t believe it.”

Mr Toland said his son was overjoyed when he received Kane’s shirt, but said he had to convince him not to wear it out on the streets playing football when it first arrived in the post.

“I had to actually tell him that’s not how it works, you’re not meant to wear it, but thankfully he listened and it’s away to get framed now.

“Caleb’s so innocent, Harry signed the yellow Spurs kit, which is Caleb’s favourite, so he thinks that Harry actually knew that about him.

“He thinks they are best friends now and was asking me if we’re going to visit Harry in his house when we go and see Tottenham play again.”

Mr Toland said the response his family received was unbelievable and he thanked everyone who took the time out to send a message to his son to help lift his spirits.

He said Caleb would be recovering at home for the foreseeable future, and would be watching football to help pass the time.