written by cassoscoop May 7, 2021
ShareTweet

YOUNG people in the North West have been urged to help drive down persistently high coronavirus infection rates by sticking to restrictions.

The infection rate in the Derry City and Strabane District Council arfea is currently among the highest in the UK.

Donegal has the highest rate in the Republic, with Letterkenny and Milford the worst affected.

Dr Tom Black, of the British Medical Association in the North of sreland, said the current level of community transmission in the area is a concern.

The infection rate in the north west is highest among those aged under 20 and among the under 40s, he said.

“It is obvious they are mixing, because that’s how you transmit the virus, it is obvious that they could be doing better with masks and social distancing,” he told BBC Radio Foyle.

He warned the border region is in “a bit of bother at the moment”.

“We are not in position where we can go back to normal but we are moving towards it,” he added.

Dr Gerry Waldron, of the Public Health Agency (PHA), said the current rate of infection is “down to people not heeding the advice, gathering in groups, and not keeping to social distancing.”

“It is down to really asking people to be very careful despite the fact restrictions are being eased, you still have to maintain the same behaviour as you did beforehand to get those numbers down,” he said.

There has been ongoing concern in areas like the north west, in which people live their lives on both side of the border but restrictions on public life are being eased at different times in each jurisdiction.

There has been concerns that people in Donegal are making non essential journeys into Derry and Strabane.

In figures released yesterday for Wednesday, there were a further 21 positive cases in the Derry City and Strabane District Council area, a rise of one on the previous day.

Over the past seven days there have been a further 142 COVID-19 cases in the Derry and Strabane area.

That means that since the pandemic started in March there have now been 12,324 positive cases within the council boundary – the fourth highest among all 11 councils in the North.

The rate of infection within the Derry and Strabane council area is now at 94.2 cases per 100,000, the highest in the North of Ireland.

On Thursday it emerged Health Minister Robin Swann had asked his Irish counterpart Stephen Donnelly for a meeting to discuss the potential cross-border spread of Covid-19.

Mr Swann has called on the Irish government to elicit an “appropriate and proportionate” response to recent transmission data on both sides of the border.

It comes after seven cases of Indian variant were found in the North of Ireland.

Health experts have recommended that the Indian variant be made a “variant of concern”, which would put it at the same level as other strains such as the Kent variant.

The PHA said work has been ongoing with public health officials in the Republic.

“The virus doesn’t respect borders, of course it will move where people move, so we’ve been working with our counterparts to try and reduce transmission, what we’re talking about now is enhanced efforts,” the PHA’s Stephen Bergin told BBC Radio Ulster’s Good Morning Ulster.

“The virus moves by transmission, people moving, so anything we can do to reduce transmission is the key effort, so if that involves reducing travel that will help,” he said.

Earlier this week health officials in the Republic implemented a range of measures to curb the rate of infection in Donegal. 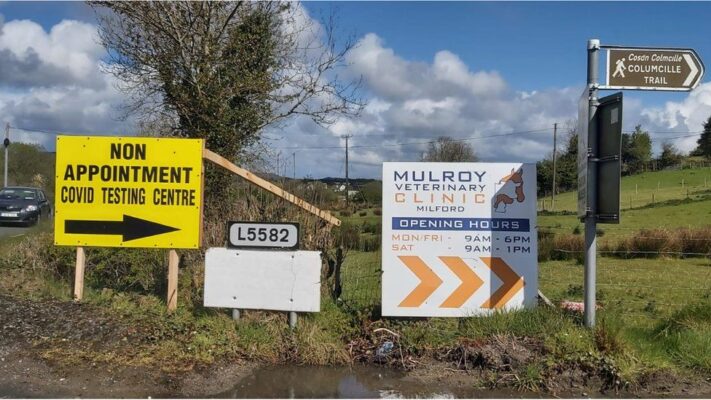 A walk-in testing centre has opened up in Milford, Co Donegal

Three walk-in test centres are now operating in the county, in Milford, Carndonagh and Convoy.

Details also emerged of a number of social gatherings in Donegal linked to the spread of the virus.

Health officials revealed that 84 cases of Covid-19 have been linked to a wake in Donegal.

A separate cluster of 32 cases came after a person was infected at a family gathering in the county and thencontinued to go to work.

And a further 19 cases were detected as a result of people attending an 18th birthday party.

Ireland’s deputy chief medical officer, Dr Ronan Glynn said there had been a “number of incidents where people have pushed the boundaries”.