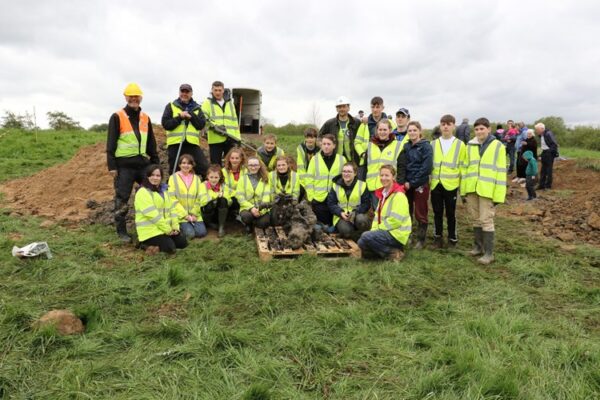 A TEAM of experienced aviation archaeologists, assisted by pupils from Foyle College Aviation Team (FCAT), successfully excavated the remains of a rare Coastal Command Bristol Beaufort aircraft over the weekend.

The excavation was licensed both by the MOD JCCC (Joint Casualty & Compassionate Centre) under the Protection of Military Remains Act 1986 and by the Department for Communities (Historic Environment Division) under the Historic Monuments and Archaeological Objects Order – HMAO 1985.

The group was supported in their efforts by funding through Derry City and Strabane District Council’s recent Youth Making It Happen Participatory Budgeting (PB) scheme, which has supported a wide range of youth focused projects across Derry and Strabane.

The project was successfully nominated through a youth led public vote after an online competition was launched last year to allocate a £20,000 PB fund for the delivery of youth led initiatives across the local District Electoral Areas.

The group have now set up a Just Giving page (Crowdfunding to Commemorate the WW2 crew of RAF Coastal Command Bristol Beaufort AW271 on JustGiving) to raise funds to place a memorial to the crew at the crash site, as well as arranging a suitable commemoration event later in the year.

In addition, they are planning for a trip to the RAF Museum – Hendon in London to meet the relatives of the crew in front of the only surviving example of a Beaufort to be found in the UK.

Using a variety of state of the art surveying and detecting equipment, the team spent almost 18 months finding the site and obtaining the relevant permissions. Anecdotal evidence had placed the crash in an adjacent field and the team spent many fruitless hours searching that location.

It was only in the Summer last year that the exact spot was finally located, as dig organiser Jonny McNee explained: “That was a great day, we were on the verge of stopping our searches, when we thought ‘one last go’ and searched the adjoining field. Within minutes we had our spot – 80 ms away from where we had been previously searching!”

The Foyle College Aviation Team pupils worked closely with the relatives of each of the crew who have been traced to keep them fully informed of the dig project.

Their teacher, Nicole Sloane, said: “They have been learning about the aircraft’s crew and gathering any family anecdotes and photographs of the crew to increase their understanding of their war time service.”

The FCAT pupils are no strangers to such digs, having previously excavated a Battle of Britain Spitfire and a US P38 Lightning as part of a critically acclaimed and award winning 18 month exhibition for Monaghan County Museum during 2017 – 2019.

A multi-disciplinary team was assembled for the dig which unearthed two large pits full of the post-crash debris tidy up that was undertaken in 1942.

The fuselage of the aircraft was consumed by fire after the impact and much evidence of the intense burning was revealed.

The pupils revealed the burnt soil surface and many pieces of molten aluminium. They also kept the relatives of the crew in England and Scotland constantly updated on what had been found.

The team knew that the site had been subject to an RAF tidy-up in 1942, but their surveys indicated that parts still remained.

Key items found were parts of a propellor blade, the fuselage ballast weights, and much piping and cabling.

One of the FCAT pupils said “It was very poignant to find evidence of the fire – the burnt wood, aluminium and melted Perspex”.

Mr McNee thanked all those who gave of their time and expertise to make the dig a success.

Trying to organise such a dig in the middle of the Covid pandemic was a difficult task and the project team acknowledged the much appreciated assistance of the PSNI in Derry & Limavady and other relevant experts who ensured the dig went ahead safely and legally.

Over the coming days, the FCAT pupils will be cleaning and preserving all the recovered artefacts before they go on display in relevant Museum locations.