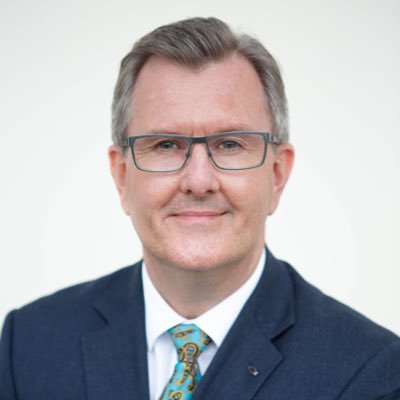 Poots and Donaldson face off for DUP leader

SIR Jeffrey Donaldson has officially announced that he is entering the race to become the next leader of the DUP.

There is now a leadership contest for the first time in the party’s 50-year history as Sir Jeffrey takes on DUP Agriculture Minister Edwin Poots.

Launching his leadership bid, Sir Jeffrey said he was convinced the “best days are ahead” for the North of Ireland.

Arlene Foster is to step down as party leader at the end of May after five years at the helm.

Mrs Foster, who faced a revolt from DUP members last week, will also step down as the North’s First Minister at the end of June.

Sir Jeffrey publicly launched his bid for leadership on Monday, the 100th anniversary of the formation of Northern Ireland.

The Lagan Valley MP first praised the work of the party’s outgoing leader, saying Mrs Foster had shown “great courage and conviction and a big heart for Northern Ireland”.

He said he was convinced that as the North of Ireland enters its second century, the “best days are ahead of us”.

Sir Jeffrey said he wanted to build a “shared future for Northern Ireland where everyone, regardless of their background, has a part to play in showing the world what we are capable of”.

He said the next century will be built on “the politics of persuasion” and that would need “positive leadership, strategy and values”.

Earlier on Monday, it was reported that Sir Jeffrey had written to his DUP colleagues confirming he would enter the race to lead the party.

He told DUP MLAs and Westminster MPs that he wanted to inform party members first, ahead of his public announcement.

In his letter, the veteran MP acknowledged the problems the party now faces.

“This has been a very difficult period for our party. It grieves me to see divisions, especially when they are played out on the public stage,” Sir Jeffrey wrote.

“We deliver best when we are pulling together, not apart.”

His letter added: “Our actions and party positions are often misunderstood and fail to get through to those we rely on to elect us. All too often you bear the brunt on the frontline.”

He also told his colleagues: “While we continue to communicate through the media and on social media, I want to spend more time on the ground listening to our party members and the wider community on the issues that matter to them.”

Stormont’s Agriculture Minister Edwin Poots declared last week that he would run for the DUP leadership.

If successful, Mr Poots would split the role of party leader from first minister with MLAs being consulted about the ministerial team.

In a statement to the Sunday Life, Mr Poots’ campaign team said the role of leader would involve rebuilding the party’s core.

Mr Poots would want to remain as Agriculture Minister, if he wins the party leadership.

At the weekend, his campaign manager, MLA Paul Frew, said Mr Poots had received the backing of the majority of the party’s MPs and MLAs who make up the electoral college.

However, Sir Jeffrey has also received significant endorsements, according to his team.

It is understood that Sir Jeffrey will have the support of East Belfast MP Gavin Robinson, who will not run for leader.

But it is not yet clear who Foyle MLA Gary Middleton will back to become DUP leader.

In order to become party leader, the winning candidate will need to secure the support of at least 18 of the party’s MLAs and MPs.