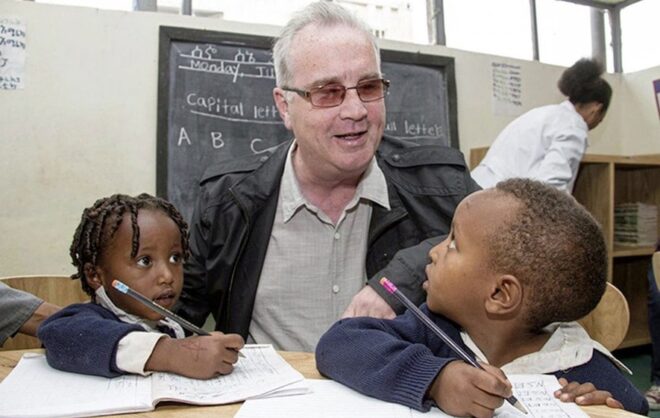 CHILDREN in Crossfire has branded a British government decision to cut grant aid to one of its African projects as a “devastating blow”.

The Derry-based charity, founded by Richard Moore, said the loss of funding for pre-primary education programme in Tanzania will let children down and “limit their life opportunities”.

Mr Moore called for the decision to be reversed immediately.

Children in Crossfire, which delivers education and healthcare across several countries, has been informed that its UK Aid Impact Grant is being stopped with just 90 days’ notice.

Mr Moore said the programme was making “forward strides” in Tanzania, particularly in the Dodoma region, and UK Aid had been pivotal in achieving impressive results.

UK Aid also highlighted the positive impact of the programme in a recent report.

“While we have been braced for some UK Aid funding cuts following recent engagement, the announcement that our grant funding is to be stopped entirely just 90 days from now is a devastating blow for the communities where we work,” he told The Irish News.

“If implemented, these cuts will have a profoundly negative impact for tens of thousands of vulnerable young children.

“Our early childhood education work has proven to give children the best possible start in education.”

Mr Moore said the move went against the ideals of global citizenship and solidarity which Children in Crossfire believed in and successive British governments had invested in.

“We exist to challenge the injustices facing the world’s most vulnerable children so it is extremely hard to accept this deeply unjust decision without a fight.

“It is as unfair as it is illogical and we will give our all to see it reversed.

“I know that, like us, many NGOs who have built excellent working relationship with UK Aid are just as bewildered by this deeply retrograde step as we are.

“We must all now work together to ensure the UK government steps back from its current position and steps up to play its full part in building a fairer world.”