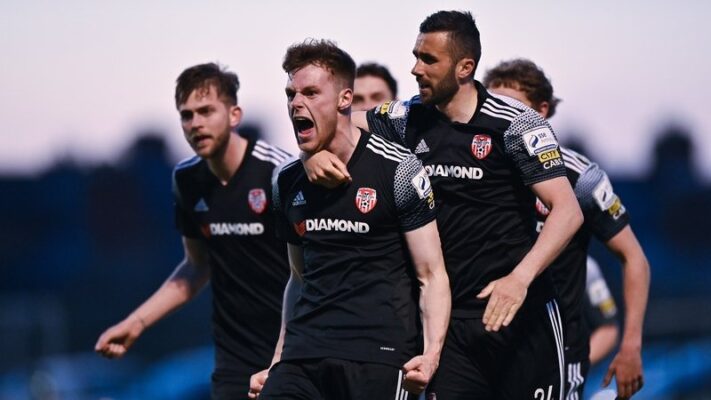 A lively game looked set to finish honours evenm on a chilly late-April night in Dublin, but the Candystripes had other ideas.

A third and then fourth goal this season from McJannet set up by Dundalk loanee Will Patching cancelled out a Georgie Kelly penalty as Derry stay unbeaten under new boss Ruaidhri Higgins.

It was a cracking game and, with the return of fans to Irish grounds getting nearer, fans have an exciting campaign to look forward to.

And Ruaidhri Higgins has turned around Derry’s fortunes now with back to back wins after an initial poor start to the season.

Ciaran Kelly slotted in at centre-back for Bohs, James Finnerty suspended, while Daniel Lafferty came in for City.

The visitors got into all sorts of trouble in the seventh minute when Eoin Toal and Nathan Gartside needlessly confused each other and were both fortunate that when the ball went loose no Bohs player had a clear shot on goal.

The trouble was only beginning though and, after Ronan Boyce scrambled the ball out for a corner with Georgie Kelly looking set to score, Keith Ward’s corner was nearly headed home by Ross Tierney but Derry cleared again.

City grew into it after that scare and James Akintunde could only pull his effort wide from Will Fitzgerald’s cross.Bohs went ahead on 16 minutes.

Ciaran Harkin was too slow to the ball in the box and the impressive Tierney got there first before being kicked in the air by Harkin. Up stepped Georgie Kelly who made no mistake.

It was somewhat unfortunate on Harkin, who had a good first half otherwise, cool on the ball. Though Bohs were the better team, Derry looked certain to have equalised on 34 minutes as Will Patching’s free-kick was headed off the bar by Akintunde. He deserved better.

At the other end, George Kelly was fouled at least twice when struggling towards the goal, but somehow no free-kick was given to the big man from Donegal, becoming a key player for the Gypsies.

Andy Lyons raided down the right under the main stand but fired straight at Nathan Gartside after being found by Keith Ward.

Ward, like Bohs on song on the evening, looked sure to have put them two ahead five minutes into the second half but Gartside made a superb save down to his right.

Derry made a double switch on 58 minutes and one of those introduced, the lively Marc Walsh, forced a superb save with his feet from Talbot; from the resulting corner, Patching’s floater was headed home by McJannet.

Suddenly Derry were the better side and with 15 minutes left Dan Lafferty stole in at the far post but Talbot brilliantly smothered his header.

Despite Bohs pressure, it was McJannet who decided it, showing remarkable composure to slot home from another Patching delivery with a minute to go.