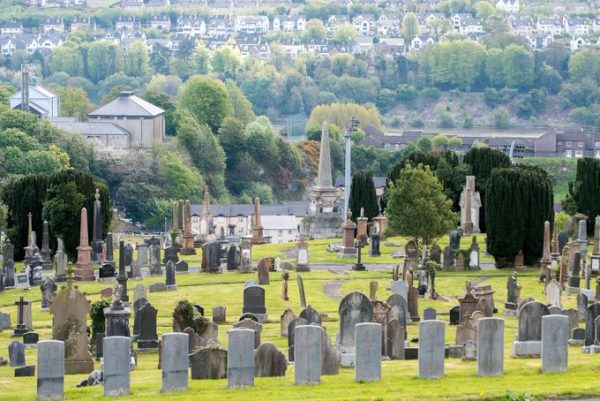 A protest held at Derry city cemetery in April this year over its continued closure[/caption]DERRY City and Strabane District Council at its Full Council meeting has ratified a decision made last week by Elected Members attending a Special meeting of the Environment and Regeneration Committee relating to extending the City Cemetery.

The committee also approved progress to construction on site, subject to certain conditions being met.

Details relating to project progress were outlined to members at the meeting.

They include details of proposals to construct a new access road into the existing cemetery off the lower end of Southway to alleviate existing road safety concerns associated with vehicles exiting the cemetery via the existing Lonemoor Road gated entrance.

Members heard how the new extensions would extend the operational life of the City Cemetery for new plot openings by up to 7 years.

Members were informed that the rational for developing the new plots is to provide additional time for Council to select, assess, secure and develop a suitable site for a new cemetery on the west bank of Derry City i.e. a facility with a new plot opening capacity in excess of 20 years from opening and ideally with scope for further expansion onto adjoining lands.

It is expected that a separate report in relation to proposals for a new cemetery will come before members soon.

Councillors heard how Council has engaged with the local residents and elected representatives in the area and have taken on board their concerns around traffic management, ecology, fly tipping and anti-social behaviour.

It was confirmed at the meeting that up to 35 additional parking spaces would be provided along the new access road into the cemetery, which could be utilised by either local residents, or visitors to the facility and that there was a commitment by Council to commission an independent traffic management assessment of the new proposals as well as a Biodiversity Management Plan for the wooded area.

A planning application for the proposed works was submitted at the end of March 2021.

Welcoming the decision to advance with the cemetery extension,, the Chairman of the Environment and Regeneration Committee Alderman Maurice Devenney said this was an essential project to extend the current lifespan of the City Cemetery.

He extended his thanks to the officer team for their continued work in progressing with this and said it was vitally important that Council also progressed with advancing with its plans for a new cemetery on the west bank.