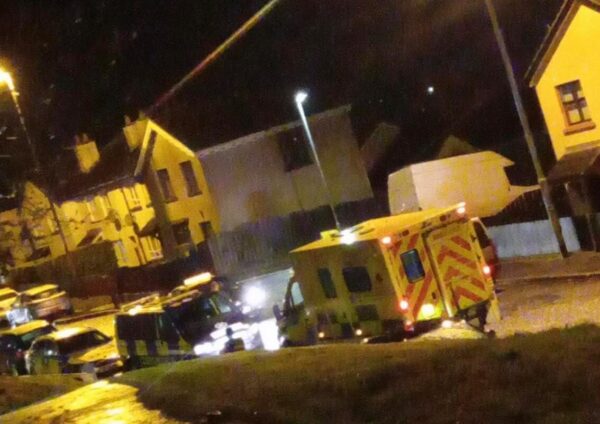 A 42-year-old man has faced a court in Derry charged with the attempted murder of a policeman in the city earlier this month.

Police were called to the home of the vulnerable man on Saturday, April 17 after receiving a self harm report.

During the incident at a flat in Celandine Court in the Gobnascale area a police officer was stabbed in the head and arm.

CS Spray was used and one police officer discharged his Glock handgun, hitting the householder in the chest.

He was taken to hospital for treatment.

Appearing at Derry Magistrates’ Court today for a first remand hearing was Noel David Quigley, of Celandine Court, where he was charged with the attempted murder of a police officer on April 17.

Derry Magistrate’s Court heard that the 42-year-old contacted police to report that he was going to harm himself.

Police attended his home and it is alleged Quigley was sitting in the living room with a knife in each hand.

It is alleged he attempted to harm himself and police intervened and tried to reason with him.

The court heard that police used CS spray during the intervention and it is alleged Quigley then “lunged at police with both knives”.

He was warned to drop them and it is alleged he began lashing out, “stabbing and slashing about the head” of a PSNI constable.

It is alleged the attack only ended when another police officer used his firearm.

An investigating officer told the court the defendant was taken to the Royal Victoria Hospital in Belfast for treatment.

He was then arrested on Monday, April 19 and after discharge on April 25 he was taken into police custody for questioning.

The officer also told the court that the police constable sustained puncture wounds to his right arm and a number of cuts to his head.

Opposing bail, the officer said police have concerns that Quigley poses a danger to himself and to the public.

She said Quigley has 15 previous convictions for assaulting police and these range from him biting police to headbutting, kicking and punching officers as well as making threats to stab police with syringes.

The officer said occasionally the defendant has bitten police officers and told them he has AIDS or Hepatitis B.

The officer said police have concerns the defendant will reoffend, particularly if he consumes alcohol.

Defence barrister Eoghan Devlin told the court his client had provided a statement during police interview detailing his account of the alleged incident.

Quigley claimed he panicked after the spray was used because it was “overpowering” and admitted that he struggled with police.

However, the defendant also said he was not trying to stab any officer.

The round then entered his lung and went out the back of his body, breaking three ribs.

He said it was his understanding that the police officer did not sustain any injury, adding that no allegations of injury or of “stabbing or slashing” were put to Quigley during police interview.

District Judge Chris Holmes said he wanted to see a medical report in respect of the police officer.

Quigley was remanded in custody to Maghaberry prison until then.