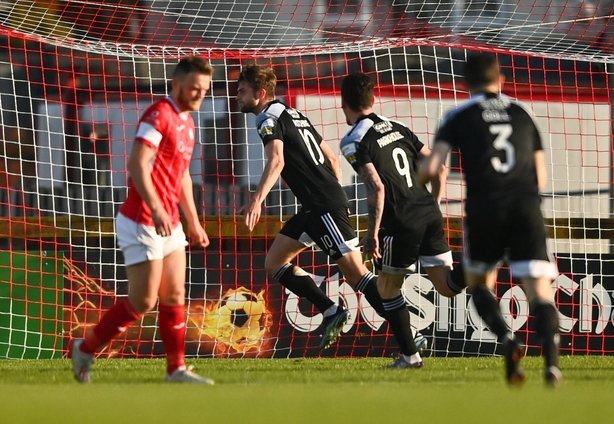 Ruaidhri Higgins gets City off to winning start

Will Patching celebrates after converting his penalty

Ruaidhri Higgins got his tenure as Derry City manager underway in ideal fashion as the Candystripes picked up their first win of the SSE Airtricity League season by beating Sligo Rovers 1-0 at the Showgrounds last night.

In a scrappy game, it was Will Patching’s spot-kick early in the second half which decided the game, giving City their first win of the season and Rovers’ first defeat of the year.

After the win, Higgins said: “It was a very good team performance. There weren’t very many chances at either end but defensively I thought we were very good.

“We restricted them to limited chances. I hope we will improve in terms of our attacking play and keeping possession of the ball.

“To a man they carried the instruction and a gave a real gritty performance.”

Both sides made just one change each from their respective previous games.

Rovers club captain David Cawley was named in a Sligo starting line up for the first time this season, replacing Walter Figueira who picked up a knock during Tuesday’s win over Bohemians.

While Higgins made just one change from City’s draw with champions Dundalk, Will Patching taking the place of Danny Lafferty.

In what was an opening half with little to get excited about, it took all of 28 minutes for the tie to produce a moment of note.

Derry’s James Akintunde linked up with Patching who fired over from 25 yards.

17-year-old Sligo striker Johnny Kenny, understood to be attracting the attention of Premier League club Brighton, was involved shortly after.

The teenager jinked his way past a City challenge on the end line, but his squared ball was dealt with by Nathan Gartside in the Derry nets before anyone could arrive to finish.

Liam Buckley’s charges struggled to create much against a robust Derry defence.

Kenny, Jordan Gibson, Greg Bolger and Romeo Parkes required some slick passes to find a way to the Derry penalty area five minutes from the break.

But what looked like a potential opening was quickly closed out as Parkes was eventually crowded out by an eager Derry defence.

Gibson’s steered an effort wide of goal before half-time, while the game had its first real talking point just five minutes into the second period.

Sligo centre-half John Mahon’s clumsy challenge on David Parkhouse just yards from goal, was punished by referee John McLoughlin who had no hesitation in pointing to the spot.

Rovers, who hadn’t lost to their opponents since 2019 prior to this game, continued to struggle to create much against a stubborn Derry rearguard.

Gartside had to keep an eye on Regan Donelon’s over-hit cross which caught the breeze and narrowly sailed wide of the Derry goal.

The Connacht side introduced a number of attackers from the bench but were repelled again and again by Derry who defended well and hung on to pick up their first victory of the year.