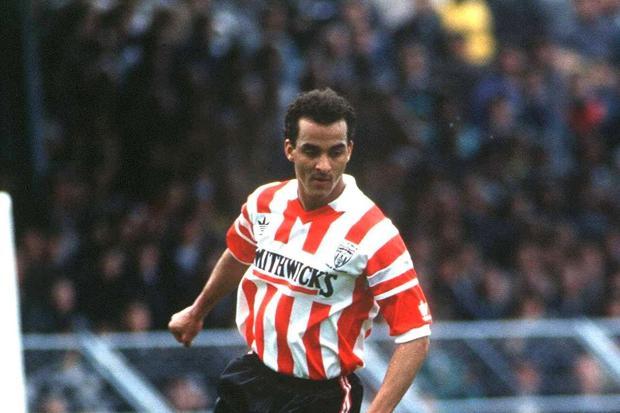 A DERRY band is releasing a new single in tribute to the city’s most beloved footballing import.

Strength N.I.A released the track Owen Da Gama on Friday about Derry City’s South African forward in conjunction with a new documentary on the club.

The band’s lead singer and songwriter Rory Moore is childhood friends with Different League: The Derry City Story director Guy King and collaborated on music for the project.

Da Gama caused a stir in the north west when he joined Derry City in 1986 shortly after their entry into the League of Ireland.

His goals helped the club to promotion to the top division and though he departed in 1988 he is still remembered fondly in the city today.

Such was his popularity that at the height of his time with Derry he was the only footballer in Ireland to have his own fan club and local children were even named after the South African.

Moore said he remembered watching Da Gama play for The Candystripes in his pomp.

He told BBC Radio Foyle: “It was around the time of the 1986 World Cup and there was people like Diego Maradona about, Zico, Socrates and you were watching it all on the TV and then suddenly there was Owen Da Gama, Nelson Da Silva at the Brandywell.”

The documentary charts Derry’s return to senior football after leaving the Irish League at the height of the Troubles.

“I remember crowds at the Brandywell, but away matches were even more impressive because you were seeing this wall of red and white at places like Dalymount Park (Dublin) or Cork,” Moore recalled.

“The sense of pride that you felt, I remember just feeling overwhelmed with joy that there was this colour and everyone was there.”

The songwriter revealed the song about Da Gama came about after King was unsure about some of his previous submissions for the project.

“I told him I really wanted to be involved, he got back to me and he was like, ‘right I need a piece of music for when Owen Da Gama is introduced in the film’ and I was like, ‘leave it with me’,” Moore recounted.

“I just channelled that brief and came up with something that thankfully he really liked. I was chuffed it made the grade.”

In an interview in 2010, Da Gama said: “My time at Derry was one of the happiest periods of my life.

“I still hold the club dear to my heart.

“I had so many parents in the city who looked after me.

“To this day I am still in contact with some of the friends I made.”