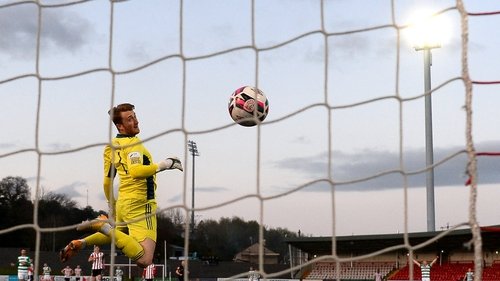 IT was a spirited performance by a young inexperienced team but it wasn’t enough for Derry City who suffered their fourth defeat of the season tonight in a 2-0 deaf to Shamrock Rovers.

The Hoops bagged the three points with two goals in the first half at the Ryan McBride Brandywell Stadium.

And Graham Burke’s strike is a potential goal of the season winner that keeps the Candystripes firmly rooted to the bottom of the Premier Division.

Ireland midfielder Burke found the net from the halfway line minutes after Rory Gaffney had given Rovers the lead on the half-hour mark.

City were inches away from breaking the deadlock on 16 minutes as Sean Hoare’s header back to Alan Mannus was too short, but the centre-back’s blushes were saved as David Parkhouse’s shot past the out-rushing Rovers keeper, clipped the post.

Rovers went close themselves a minute later as Gaffney’s cushioned lay-off found Burke inside the box, but the midfielder’s close range side footed effort was well saved by City keeper Nathan Gartside.

Stephen Bradley’s men did open the scoring on 34 minutes as Burke’s angled drive from the right side of the Derry penalty box was outstandlingly kept out by a diving Gartside, but Gaffney gratefully turned home the loose ball from close range.

The champions doubled their lead five minutes later in stunning fashion as Burke caught out Gartside with an unbelieveable 45 yard strike, which sailed over the back tracking Derry keeper and into the net.

On 58 minutes another long range strike from Burke was this time gathered at the second attempt by Gartside. 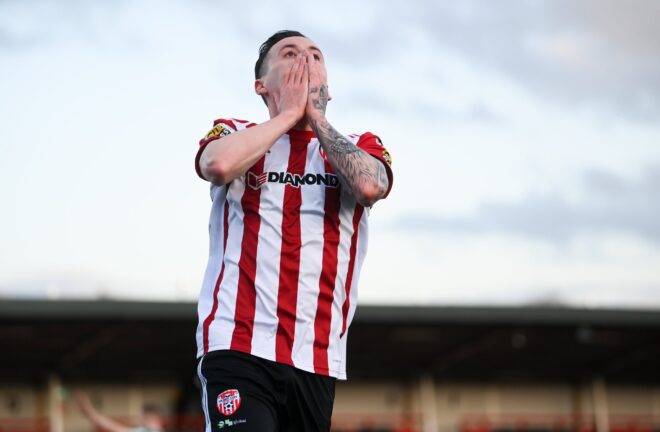 The impressive Danny Mandroiu broke clear down the right on 76 minutes, but his low drive from the angle was well parried away by Gartside.

In the closing stages Rovers substitute Aaron Greene went close, but his shot hit the side netting.

Next up for Derry is a home league game against Drogheda United this Friday, April 16 at the Brandywell (kick off 7.45 pm).