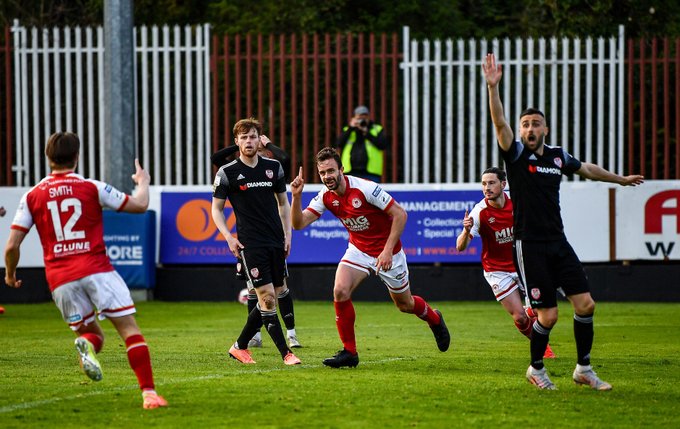 DERRY City remain bottom of the League of Ireland Premier Division table and without a point after a 2-0 defeat by St Patrick’s Athletic in Dublin.

The Candystripes were reduced to 10 men on 32 minutes after defender Danny Lupano received a second yellow card.

Keeper Nathan Gartside kept Derry on terms in the first half as he made a number of fine saves.

But Robbie Benson put Pat’s ahead on the hour mark with substitute Darragh Burns doubling their advantage on 72.

The victory moves Pat’s three points ahead of Finn Harps and Sligo Rovers at the top of an unlikely looking Premier Division table.

In contrast, Declan Devine’s side will go into Tuesday’s home game with champions Shamrock Rovers low on confidence after losing their three opening games against Longford Town, Waterford and Pat’s.

Lupano went close for Derry with an early header as the visitors made a promising start but his dismissal for a shirt tug on Matty Smith saw him get his marching orders as he picked up his second booking.

The loanee from Hull City had been given his first yellow card early on for a challenge on Smith which appeared a harsh call by referee Ben Connolly.

With the 10 men on the back foot before half-time, Gartside denied Smith, Ian Bermingham and Chris Forrester with fine saves.

However, Ronan Coughlan’s jinking run into the Derry penalty area helped set up Benson’s close-range finish as Pat’s took the lead on 60 minutes.