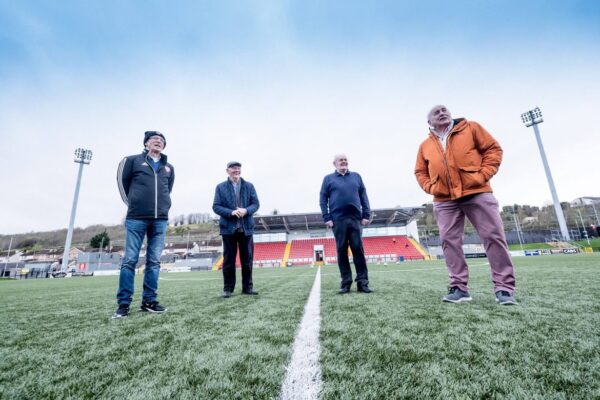 DERRY City FC says it is delighted with the announcement that a new film about the re-birth of the club in the League of Ireland in 1985 will be premiered on BBC on Monday 19 April at 9pm.

The documentary-style feature is called ‘Different League- the Derry City Story’ and is the work of film producer Guy King.

Bombscares, Benfica and the Brandywell Stadium. This is the story of a community that needed to catch a break and how its football club, exiled from the league for more than a decade, was brought back from the dead.

Originally from Glenarm in County Antrim, Mr King moved to Hatmore Park in Derry as a youngster before making his home in London. He was part of the huge ‘Red and White Army that accompanied the Candystripes around Ireland in the mid-to-late 80’s.

‘Different League’ tells the background to Derry’s expulsion from the Irish League days and how they burst onto the League of Ireland scene in a blaze of colour, seen through the eyes of several key personnel.

There’s the ‘Gang of Four’ who came up with the plan to approach the FAI, former City stars like Felix Healy and Owen Da Gama, several key Board members, the ever-lively Eamonn McCann as well as first-hand testimonies of many supporters and local dignitaries.

The film also deals with some emotional pages in the city’s history and doesn’t swerve the very public spat between Jim McLaughlin and Noel King. That of course leads into the club’s crowning glory and some fantastic footage of McLaughlin leading City to that still unique domestic treble.

Speaking to the club website last night the Director said the project was a year in the making.

“We started in March 2020 and I managed to get one interview with Tony O’Doherty the last day before lockdown.

“The other three ‘gang members’ and I had to interview on Skype. It was a good way to get up to speed with the story, so when we had a covid-window in August I was well prepared for filming:

“By then I knew the importance of the Shamrock Rovers game, the connection between Eamonn McLaughlin and Denis Tueart, the crucial input of Fran Fields, and which were the best of Eddie Mahon’s stories!

“The one thing I always notice changing in the city over the years is the music scene. Derry is one of the best live music hubs in Europe for natural talent and raw performance – there is always an exciting new band, or new release, or act passing through and waking up on someone’s kitchen floor the morning after the gig. I’m really delighted to have such a lot of homegrown Derry music in the film.

“It has turned out exactly how I hoped it would be. The film is not about any one person or group in particular, it’s more about the city and the community that made the long walk in their droves to the Brandywell on Sunday afternoons in the 1980s bedecked in red and white.

“There is a longer theatrical version too, and although COVID has put a hold on that, it will be shown on a screen in Derry. We might even try to get some of the legendary Owen Da Gama burgers available for that!

“And while the film will be shown on the BBC shortly, I do hope that in time it will also be shown on televisions in Scandinavia, America and Australia, although that will be further down the line.”

This is a must-watch for any Derry City fan and indeed for anyone who has ever had an interest in Derry itself.

It is a roller-coaster of emotions and will bring a smile, and no doubt the odd tear to anyone who was part of the memorable journey. 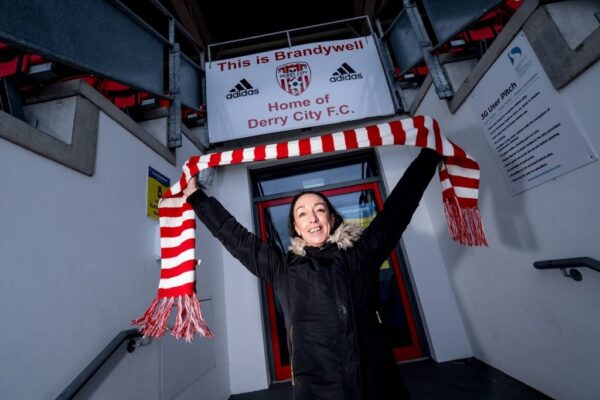 Different League: The Derry City Story follows the club through those exciting years, managed by distinguished managers such as Noel King and Jim McLaughlin and showcasing a stellar line-up of players from around the globe including the legendary Owen Da Gama and Alex Krstic as well as local heroes such as Paul Carlyle and Liam Coyle.

Derry City talisman Felix Healy put it best, when he said after their biggest match: “This wasn’t about football, this was about the people of Derry.”