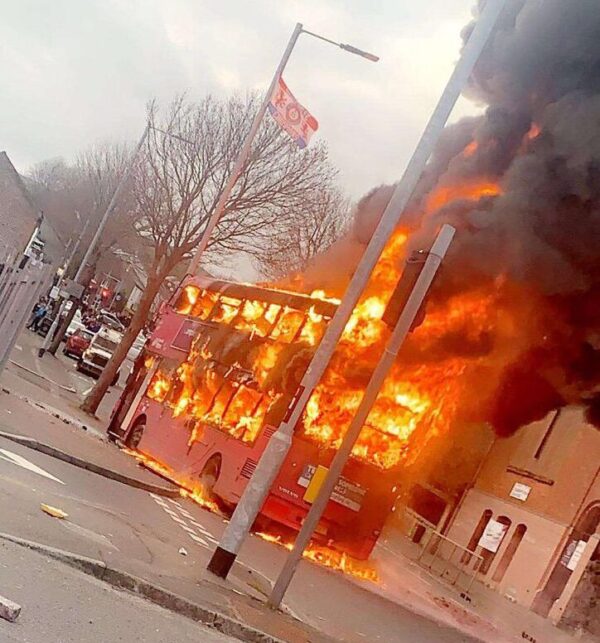 THE North’s power-sharing executive has said it is “gravely concerned” by recent street violence in Derry and Belfast and has called for calm to be restored.

During several hours of rioting in Belfast on Wednesday, police were attacked, petrol bombs were thrown and a bus was hijacked by masked youths and burnt.

It follows seven days of violence in Derry city, Carricfergus and Newtownabbbey.

Some of the most serious violence happened in the Waterside area of Derry with cars hijacked and set on fire. Police were also attacked with petrol bombs and masonry.

The Police Federation said seven officers were injured at a Belfast interface between loyalist and nationalist areas.

A total of 55 police officers have been hurt in the violence in a number of areas since the end of last month.

It was likely that paramilitary organisations were involved in the disorder, according to PSNI Assistant Chief Constable Jonathan Roberts.

He said several hundred people on each side were throwing petrol bombs in both directions in the loyalist Shankill Road and the nationalist Springfield Road.

Police officers were called in from other parts of the North of Ireland to help to deal with the rioting.

The bus driver whose double-decker was attacked and burned is “very shaken by the incident but is physically unhurt”, according to the public transport provider Translink.

In recent days 10 people have been arrested as a result of rioting by gangs of people, some as young as 13.

Prime Minister Boris Johnson said: “The way to resolve differences is through dialogue, not violence or criminality.”

NI Secretary Brandon Lewis will travel to the North of Ireland later on Thursday to meet political parties for talks.

All of the main political parties in the North of Ireland have criticised the disorder but they are divided over its causes. 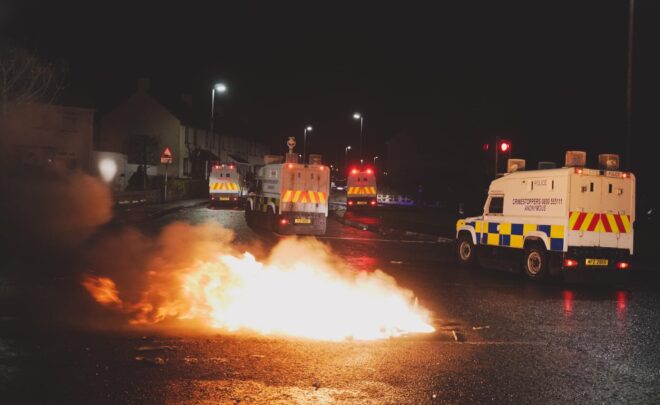 A seventh night of violence in Derry on Easter Monday night. Pic by Derry Hub

However, following an emergency meeting of the NI Executive, a joint statement was issued from ministers condemning the violence.

“We are gravely concerned by the scenes we have all witnessed on our streets over the last week, including those at the Lanark Way interface last night,” the statement read.

“Attacks on police officers, public services and communities are deplorable and they must stop.

“Destruction, violence and the threat of violence are completely unacceptable and unjustifiable, no matter what concerns may exist in communities.

“Those who would seek to use and abuse our children and young people to carry out these attacks have no place in our society.”