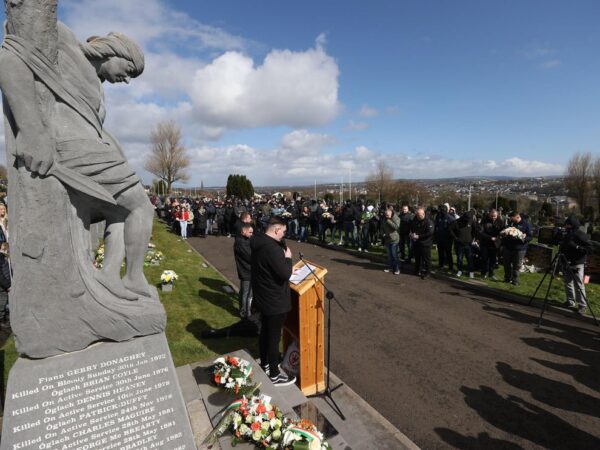 POLICE say they are investigating a dissident republican Easter commemoration held in Derry on Easter Monday.

Senior officers say an “evidence gathering” operation was carried out at the event.

Around 100 people attended the wreath-laying ceremony in the city.

The annual commemoration would normally have been led by a parade and masked republican colour party.

However, there were no paramilitary trappings at yesterday’s event which was organised by the Derry 1916 Commemoration Committee.

While several youths attempted to block a road outside the cemetery as the commemoration was about start, they were dispersed by community activists. A PSNI helicopter observed the event from overhead although there was no on-the-ground police presence.

Chief Superintendent Jones said: “Evidence gathered will be reviewed and any breaches of the Health Protection (Coronavirus) Regulations, or other legislation, will be addressed by way of Fixed Penalty Notice or by report to the Public Prosecution Service as appropriate.”

The event was the first Easter commemoration held in Derry since 2018.

A planned event in 2019 was cancelled following the murder of Lyra McKee, who was shot dead by a New IRA gunman firing at police lines while she observed rioting in the city.

Last year’s event was moved online due to the coronavirus pandemic.

The Derry 1916 Commemoration Committee originally announced that the event would start with a parade from the gates of Derry City Cemetery to the republican plot.

However, this was modified to a wreath-laying ceremony following talks with community leaders.

While the numbers who attended appeared to exceed that permitted under Covid regulations, organisers did ask those taking part to observe social distancing.

Some of those gathered however did not wear face coverings.

He also accused police of showing no regard for coronavirus protocols during searches in working class communities.

Mr Murney said that while the pandemic had forced Saoradh to adapt its tactics, the party has used the crisis to develop in other areas.

He added that Saoradh would continue its campaign for the establishment of an Irish socialist republic.