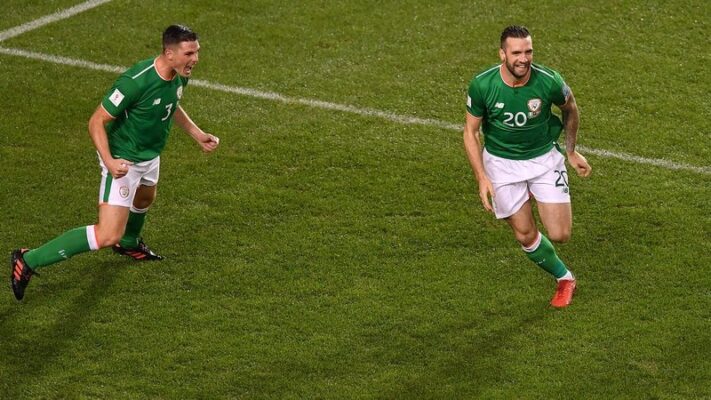 CIARAN Clark is backing Shane Duffy to prove his World Cup pedigree as the Republic of Ireland prepare to launch their campaign in Serbia on Wednesday, March 24 (kick off 7.45 pm).

Duffy has been a fixture in the Ireland team more or less ever since getting his chance at the Euro 2016 finals, at one point forming a formidable central defensive partnership with Newcastle’s Clark.

However, the 29-year-old Derry-born player has lost his place at Celtic, where he is on loan from Brighton, in recent weeks and met up with a question mark hanging over him.

Asked about Duffy’s contribution to the Ireland team, Clark said: “Everyone knows what he brings. He’s a real quality defender who leaves everything on the pitch and will head and clear anything that comes his way.

“He is a player with a lot of experience and everyone knows what he can do. He is a top-quality player.”

Clark and Duffy were paired together by former boss Martin O’Neill during the qualifying campaign for the 2018 World Cup, but have not started a game together since a 4-1 Nations League defeat in Wales two and a half years ago.

Injuries have hampered Clark in the meantime, but he is confident the pair could reprise their double act in Belgrade on Wednesday night if asked to by manager Stephen Kenny after playing his way firmly into Steve Bruce’s favour on Tyneside.

He said: “I feel we had a good partnership at a stage, but it’s part of football that players get injured and other players come in and play and do well. You have to keep pushing and keep going and fight to get back into the squad.

“With Duffer, there wouldn’t be an issue as we played and trained together enough. It’s about coming into it and trying to train well and get prepared for two massive games.”

Clark and Duffy did start together in Ireland’s disastrous 5-1 World Cup play-off defeat by Denmark in November 2017.

It was a night when the Republic rearguard was ripped apart by a rampant Christian Eriksen, although the former Aston Villa trainee insists he never feared that might end his international career.

He said: “No, I never felt that. Everyone was really disappointed at that time, but I never thought that was the end of it.

“You have to take the highs with the lows and work hard in training to put yourself back in the position to get back involved, and that’s what I’ve done.”