Longford v Derry: Back to basics for Candystripes 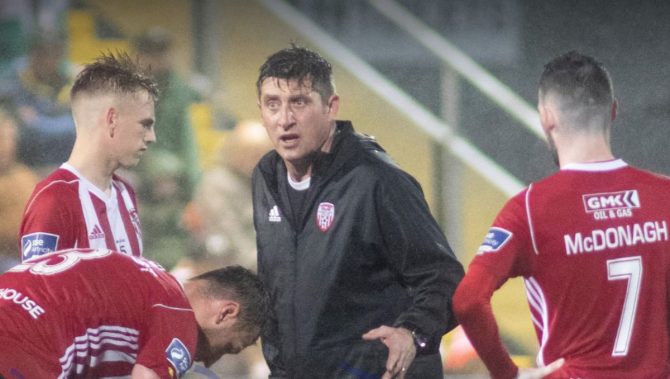 THE new SSE Airtricity league season will bring fresh hope for Derry City fans today as Declan Devine takes his side south to Longford Town for their season-opener at Bishopgate (kick off 6 pm).

After a year that most around the club will be happy to put behind them, the Derry boss was in a reflective mood on the eve of the new campaign.

“I’ve said many times that I found it extremely difficult to gel the players with all the restrictions in place in 2020,” says Devine.

“We needed to have more of a home-grown feel about us after that, and that’s where we are trying to go this year.”

Derry have brought in the likes of midfielder Will Fitzgerald, formerly of Waterford, Will Patching from Dundalk, Marc Walsh and Northern Ireland international Danny Lafferty during the close season.

David Parkhouse and Danny Lupano return to the club as well, and the average age of the squad has dropped to 23 as the Manager looks to find the right balance between youth and experience.

“There is definitely more togetherness about the group this time and the age profile has certainly helped.

“I can see the difference every day in training.”

For their part, Longford were promoted from the First Division via the play-offs last autumn and haven’t played in the top-flight for five years.

There is no doubt that they will be up for this one and Devine has been keen to stress that ‘De Town’ will be no pushovers.

“I’m under no illusion that this is a huge game for them. They’ve some quality players in their ranks and they’ll be determined to start well. We have got to be ready and understand that it is going to be a very difficult game.”

Although the City manager was reluctant to cite his targets for the season he did stress his desire to have the club in a ‘good place’ for when fans are allowed back into the Brandywell, and he has urged his side to play their part.

“We have got to uphold our side of the bargain to enable our fans to come back in and get behind us again, for them to drive us on in the second half of the season.”

“Every win, every point will be priceless and we want to get the momentum going with us.”

The visitors claimed the spoils the last time these sides met in the league – Derry winning 3-2 at Bishopgate.

City fans would be delighted with more of the same this evening but this is a very tricky opener for the new-look Candystripes.

WatchLOI offers the opportunity to watch City’s games up until the mid-season break, and is incredible value at just €59.

The platform allows subscribers to watch all League of Ireland games, which will see games screened in three time slots every weekend.

Individual game passes can be bought for €5.

WATCHLOI is included with City’s Platinum Membership. Gold & Silver Members should have received a code for a discount on the purchase price of €59.

If you have purchased WATCHLOI through Derry City, validation and processing is taking 24-48 hours. If you wish to upgrade your membership, please contact members@derrycityfc.net.

Any codes purchased after noon on Saturday 20th March will not be processed in time for the Longford game.

Derry City strongly recommend that you test your code before the Longford game.

As this is an FAI platform, Derry City is not in a position to offer technical support. All queries should be directed to WATCHLOI.

You can also follow the match via City’s social media presence.